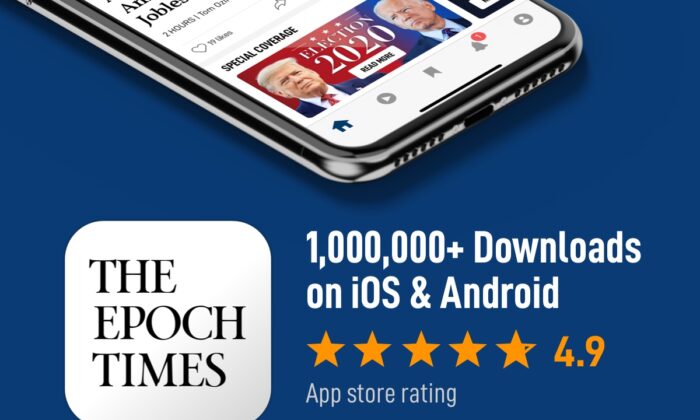 The Epoch Times app, one of the highest-rated apps, has over 1 million downloads on iOS and Android app stores. (The Epoch Times)
Media Statements

The Epoch Times iOS app as of Nov. 12 is the No. 1 app in the Magazine & Newspaper category in the Apple store. We would like to thank all of our readers for making this possible.

Readers deserve and demand factual and unbiased reporting, and we would like to say that we hear you clearly.

Many media organizations have failed the public for too long. While other media were quick to call the election, The Epoch Times, as an independent media outlet, has stated it will not declare a winner until all results are certified and any legal challenges are resolved.

We have been covering President Donald Trump factually and without bias from the day he announced his presidential bid, while some mainstream media have shown bias against him. We apply the same principles to any candidate running for public office, regardless of party.

Pursuing the truth is never an easy task.

In America, our advertisers have been threatened by Chinese consular officials and our newspaper boxes have been vandalized. In Hong Kong, one of our printing presses was set on fire. Recently, attacks have come from our peers—other U.S. media organizations that don’t agree with our reporting.

However, we know you—our readers—are always at our side; our app downloads are soaring and the amount of positive feedback we’re receiving is overwhelming. The Epoch Times app so far has over 1 million downloads on the iOS and Android app stores combined, and it’s one of the highest-rated apps.

However, the mission of restoring public confidence in journalism is far from complete.

We will continue our factual and unbiased reporting and seek to uphold the highest standards of traditional journalism.

Correction: A previous version of this article misstated the factors that affect app rankings on the Apple App store. The factors include the number of downloads, user experience, user ratings, and the overall performance of the app. The Epoch Times regrets the error.