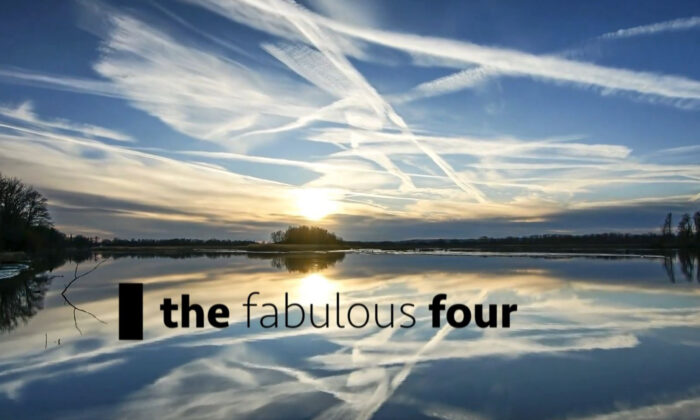 "The fabulous four" documentary on EpochTV. (Screenshot via The Epoch Times)
EpochTV Reviews

Watch the “The Fabulous Four” on Epoch Cinema here.

Sometimes, I believe that in these modern times, we don’t have the appreciation that we once had for nature—particularly the four elements that surround us every day. And with the advent of both virtual and augmented reality, both of which are being increasingly pushed upon us as “the next big thing,” some individuals (such as myself) are content with what we already have: the natural world that provides us with the four major elements of water, fire, air, and earth.

Epoch Cinema presents director Pietro Pellizzieri’s exemplary documentary that delves into the four “fabulous” elements—and how important they are to all life on earth—titled “The Fabulous Four.”

As the film begins, the narrator gives a brief breakdown of the four elements and I begin to realize that my own thoughts are in sync with what he is saying.

He describes fire as the purifying element that represents the “principle of life” through the powerful energy it generates. Air is an elusive element and although it is something people continuously breathe in and out of their bodies, it is often taken for granted. On the other hand, earth is solid, primordial matter that provides the literal foundation of life on Earth. And last but not least is water, an unyielding force that forms our beautiful rivers, lakes, and oceans, and sustains all life.

Majestic waterfalls are shown in the film. (“The Fabulous Four”/Screenshot via The Epoch Times)

The narrator first dives into water (pun intended) as a crucial element here on Earth. Water is important in many ways—from providing natural habitats for many species of plants and animals, to cooling off underwater vents where super-heated magma spews forth. About 60 percent of our body weight is from water.

Above the water level, there are volcanos, which since ancient times, man has been both fascinated by and fearful of. According to ancient legends, throughout the centuries, many cultures have been wiped out by volcanic activity. But some countries, such as Indonesia, still have much of their population living right on the doorstep of numerous active volcanos.

Nowhere else in the world are so many people living in the shadows of active volcanos than in Indonesia. (“The Fabulous Four”/Screenshot via The Epoch Times)

Indeed, fire has been crucial to man’s survival for such things as cooking, staying warm, and protection. Fire has forged metals into our earliest forms of armor, weapons, and defensive structures such as reinforced doors.

The narrator then shifts to what the element of earth represents in terms of where people live, and goes on to describe Oceania, Asia, Europe, the African continent, and others. He also gives some insight into each area, along with a bit of condensed history.

The film moves on to irreplaceable air, which is the element that represents life and is at once both elusive and ever-present. It surrounds our planet protectively and seeps into every nook and cranny. Like water, there are places on our planet that wind has shaped over the course of millions of years.

Life on Earth has developed following the laws of these four incredibly powerful elements. Nothing escapes the rigors of the four elements—together, they affect our changing world.

One of the things I most appreciated about this documentary was how it not only reminded me of how amazing each of the four elements is (and how they have shaped our existence), but also the myriad ways we can use them. For example, solar panels can be place in many of the deserts, since they are non-arable land, and thus provide power for vast swaths of civilization.

Although too harsh and inhospitable to sustain much life, Earth’s deserts could provide the means to sustain life after all. (“The Fabulous Four”/Screenshot via The Epoch Times)

Another thing that held my attention was the stunning cinematography. I’ve watched a lot of National Geographic-type programs in my day, as well as many nature documentaries via Epoch Cinema, but nothing so far, comes close to what is showcased in this film. From beautiful flowing waterfalls, scorching hot deserts, and exotic remote islands, the images are pure eye candy. In fact, I took so many screenshots that it was hard to choose the ones to use for this article.

The film’s moving score nicely accentuates the luscious visuals. If there was a minor gripe, it would be that the narrator sounds somewhat robotic in his delivery. But in the end, that didn’t significantly take away from my enjoyment of the film.

“The Fabulous Four” is an outstanding documentary about the natural world, told through the lens of the four major elements that surround us. By the end of its rather short 49-minute run time, I realized that I had somewhat taken our natural surroundings for granted and pledged to go to natural settings more often.

This is an interesting, visually stunning,  and hopeful film that makes one realize how fortunate we are to have such a beautiful planet and proposes ideas on how to sustainably take care of it as we move into the future.

Watch the “The Fabulous Four” on Epoch Cinema here.