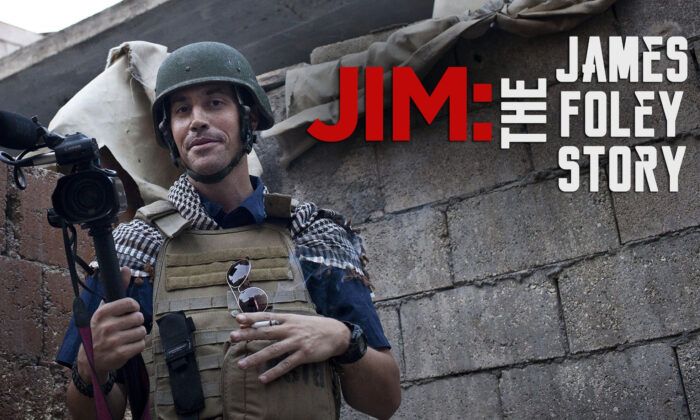 A heartfelt memorial to a conflict journalist and truth seeker.

Being a soldier in the military overseas was something that I personally know can be stressful. However, when you’re one of the guys on the frontlines, at least you feel somewhat protected since you’re armed. These days, as a journalist, I read stories all the time about the terrible atrocities being committed against journalists overseas, particularly in the Middle East.

But a journalist James Foley, the subject of a 2016 documentary called “Jim: The James Foley Story,” put himself in many dangerous situations to reveal to the world what was really going on in various war zones as a conflict journalist. This documentary feature by director Brian Oakes, a childhood friend of Foley, is somewhat of a memorial to his late friend.

The documentary shows Foley’s home life with his loving conservative family in New Hampshire and it soon becomes apparent that he was a restless spirit. What he was good at was relating to people and writing. So, he chose to switch from teaching to conflict journalism as his work sphere, since it allowed him to travel to the war-torn battlefields of Iraq, and then later, Libya and Syria.

Soon, Foley found himself in one of the most dangerous places in the world in 2012, Aleppo, Syria. Where on Thanksgiving Day of 2012, he and a colleague were captured by ISIS while covering the Syrian Civil War. Foley went missing for two years before finally turning up in a video shown worldwide, being executed by a black-clad ISIS terrorist known infamously as “Jihadi John” (later identified as Mohammed Emwazi).

But instead of focusing too much on the grisly details of Foley’s execution (he died by beheading), Oakes instead makes use of his extensive interviews with Foley’s parents, John and Diane, his various siblings, the media folks he’d worked with, and a handful of fellow journalists who had likewise been kidnapped, imprisoned, and tortured.
Interestingly, the ISIS terrorist who jailed the international group of journalists targeted Foley with much of his brutality. Unlike Foley, some of his fellow prisoners were released since their home countries agreed to ransoms or prisoner exchanges.

During the documentary’s second act, the horrific details of the prisoners’ captivity and accompanying torture are re-created in artistically done, albeit haunting, scenes. Some of the surviving journalists recount what they and others were subjected to in gruesome detail—perhaps a little too much so. But thankfully, the segment isn’t overly long.

What was enjoyable were the frequent shots of war-zone footage, much of which was taken by Foley himself. This gives a sense of intimacy and understanding of what Foley experienced during his day-to-day coverage of various Middle-Eastern hot zones. The footage gives weight to not only the danger U.S. military personnel faced on a daily basis, but also the toll on the civilian populations caught in the middle of the many internecine battlefields soaked in blood.

We also see various interviewees that express feelings of regret, such as Foley’s brother John Jr. During a brief visit by Foley back to the States to visit his family, John Jr. tried his best to understand why Foley kept wanting to put his life in grave danger. The two siblings had many heated discussions before Foley flew off overseas again for his final fateful trip to Aleppo.

Other people ponder (and in some cases obsess) over what they did wrong, or what they think they should have done. In any event, Foley’s parents conclude that the U.S. government wasn’t being completely honest with them after news of Foley’s disappearance became known.

One thing that is clear, is that Foley risked life and limb to expose what was going on within these different conflict zones, and often gave a very human touch to his work. He always enjoyed being around children (as he had when he was a teacher) and it became apparent that he was greatly impacted by seeing so many dead children in the areas he covered. Thanks to brave journalists like Foley, the world was exposed to many of the atrocities that occurred in these previously lesser-known war zones.

This is a well-produced and well-paced documentary that weaves Foley’s younger years in with his journalistic work in the Middle East. It’s a sympathetic look that casts Foley as a kind spirit who deeply cared for the downtrodden.

In some spots, the film gets a little sentimental, but that doesn’t detract from its overall impact. “Jim: The James Foley Story” is a cinematic reminder of the danger that many real journalists put themselves in to get the truth out to the world. It’s also a touching memorial to a gentle and inquisitive soul named James “Jim” Foley.