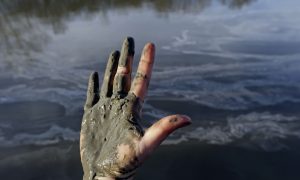 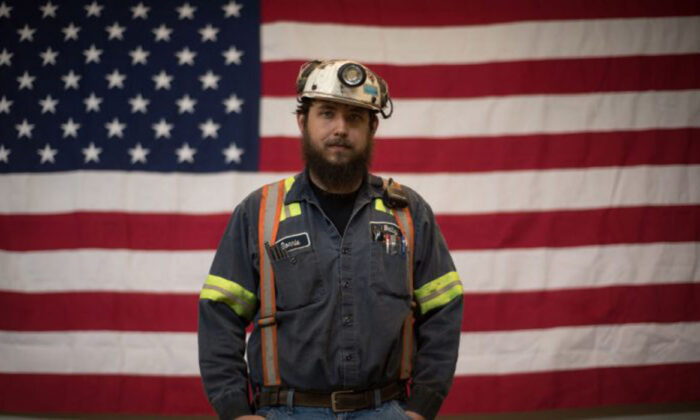 Donnie Claycomb, 27, of Limestone, W.Va., who has been mining for 6 years, stands in front of an American flag prior to an event with U.S. Environmental Protection Agency Administrator Scott Pruitt at the Harvey Mine in Sycamore, Pa., on April 13, 2017 (Photo by Justin Merriman/Getty Images)
US News

The Environmental Protection Agency (EPA) announced on Monday that it will relax regulations on how coal-fired power plants dispose of so-called coal-combustion residuals (CCRs), known as coal ash.

The regulations had been introduced by the Obama Administration to force coal-based energy providers to install mechanisms to clean up the processing and storage of waste products from firing coal. These waste products include fly ash, boiler slag and flue gas desulfurization residues, and can contain arsenic, lead, and mercury. Such substances can pose a serious threat to human life and/or ecosystems if storage facilities fail.

During his 2016 presidential campaign, President Donald Trump made coal an election issue, vowing to maintain what he called “clean coal” as a cornerstone of the American energy mix with nuclear, gas, hydro-power and renewables making up the rest. Trump proceeded to roll back a number of Obama-era regulations on the coal industry, and has sought to reign in the coal industry’s slide as gas and renewables encroach on its market share.

The Obama administration’s Clean Power Plan was a series of measures introduced to promote renewable sources of energy (especially wind and solar) while forcing operators of carbon-intensive power plants such as coal- and gas-fired power stations to modernize their facilities.

One such step was a set of regulations (including some on coal ash management) that critics dubbed “The War on Coal,” as they were viewed by some in the energy industry as a method of giving renewables and gas an advantage by ensuring that older coal-fired power stations would have to be shuttered, as the cost of retrofits would often be prohibitive.

Ash residues are normally stored in management facilities or pools, where the sludges and ashes are dewatered over time before being reused in concrete and wall-board products, or being sent to landfill. However, many such facilities are clay-lined ponds or are situated close to surface water or groundwater bodies.

Rules introduced in 2015 by the Obama administration required coal-fired power plants to invest in wastewater treatment facilities and to monitor storage ponds closely. The proposed changes now allow companies to leave coal ash in ponds until as late as 2028 – 8 years more than foreseen by the Obama-era EPA. However, the fundamental requirements of the 2015 regulations remain unaltered, e.g. in relation to monitoring and corrective action.

According to a guideline on the issue, the EPA estimates its proposed rule would result in a cost savings of “…more than $175 million annually in pre-tax compliance costs while reducing the amount of pollutants discharged to our nation’s waters by approximately 105 million pounds per year…” over the existing Obama-era regulation, due to coal companies ability to implement less costly water treatment and water transport technologies.

America is blessed with extraordinary energy abundance, including more than 250 years worth of beautiful clean coal. We have ended the war on coal, and will continue to work to promote American energy dominance!

The Nov. 4 proposal came after the EPA evaluated the steps owners and operators would need to take before ceasing to receive waste into affected ponds or to develop alternate capacities. For affected impoundments, the report specifies “A new date of Aug. 31, 2020, for facilities to stop placing waste into these units, and either retrofit them or begin closure.”

“Today’s proposed actions were triggered by court rulings and petitions for reconsideration on two 2015 rules that placed heavy burdens on electricity producers across the country,” according to EPA Administrator Andrew Wheeler. “We are proposing both at the same time in order to provide more certainty to the American public. These proposed revisions support the Trump Administration’s commitment to responsible, reasonable regulations by taking a commonsense approach, which also protects public health and the environment.”

There is also “A court mandated change in the classification of compacted-soil lined or ‘clay-lined’ surface impoundments from ‘lined’ to ‘unlined,’ which means that formerly defined clay-lined surface impoundments would no longer be considered lined units and will need to be retrofitted or closed.”

At EPA, we are finding the l balance in our regulations to ensure a healthy and safe environment while also saving the taxpayer $3.6 billion. And we’re just getting started. https://t.co/uTHTivZqx5

Critics of the 8-year extension for closing some ash ponds have pointed to the environmental hazards CCRs can pose. On Dec. 22, 2008, a dike used to contain coal ash in Harriman, Tennessee, failed, releasing some 500,000 cubic yards (158 Olympic-sized swimming pools) of waste over roughly 300 acres—including into the Emory River channel. The clean-up operation took approximately 6 years and cost $1.178 billion.