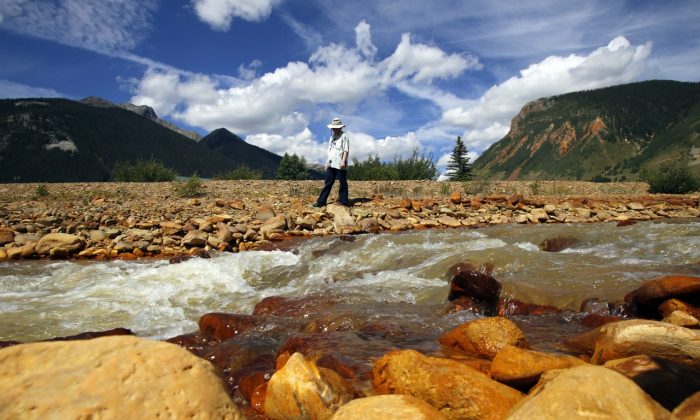 Melanie Bergolc walks along the banks of Cement Creek in Silverton, Colo. on Aug. 10, 2015. The area is a few miles downstream from the Gold King mine, where a wastewater accident several days earlier allowed water contaminated with heavy metals to pour into the creek that feeds rivers critical to survival on the largest Native American reservation in the United States and across the Southwest. (Jon Austria/The Daily Times via AP)
US

DURANGO, Colorado — The U.S. Environmental Protection Agency on Thursday said its surface-water testing done before, during and after 3 million gallons of mine waste flowed through Colorado show very high levels of lead, arsenic, cadmium and other heavy metals in the sickly-yellow plume.

These metals far exceeded government exposure limits for aquatic life and humans in the hours after the August 5 spill, which sent the wastewater through three Western states and the Navajo nation.

The EPA, which released the results after 2 a.m. Eastern time under increasing political pressure, said its analysis shows the heavy metals returned to “pre-event levels” after the plume passed in the Animas River between Silverton, Colorado, and the downstream municipal water intake for Durango.

The abandoned Gold King mine had been slowly leaking a toxic stew for decades before an EPA crew accidentally unleashed a torrent of waste while inspecting the pollution on Aug. 5. EPA administrator Gina McCarthy has taken full responsibility and promised that the agency will pay for any damage.

The agency tested for 24 metals at the river’s surface. One of the most dangerous, lead, was found below the 14th Street bridge in Silverton at more than 200 times higher than the acute exposure limit for aquatic life, and 3,580 times higher than federal standards for human drinking water.

The 100-mile-long plume has since dissipated, its heavy metals settling into riverbeds, during the waste’s 300-mile journey into Lake Powell, where the flow joins the Colorado River that supplies water to the Southwest.

EPA officials have said testing of sediments is planned, but agency spokesman Robert Daguillard could not say Thursday if that work had yet begun or if any results had been obtained.

Gold King is one of a cluster of old mines that have been sending pollution downhill from tunnels dug 11,000 feet high in Colorado’s San Juan Mountains. The spill has already disrupted thousands of lives and livelihoods, and s in three states and the Navajo Nation. And because the federal government inadvertently triggered it, the agency has vowed to pay the bills, which could take years to tally.

Attorneys general from Colorado, New Mexico and Utah vowed to ensure citizens and towns are compensated for immediate and long-term damages from the spill. But Colorado’s attorney general, Cynthia Coffman, said the full impact may not be understood for years.

“We have to be vigilant as attorneys general, as the lawyers for the state, as protectors of the environment, to be sure that the assurances that we received today from the Environmental Protection Agency are the same in two years, in five years, even 10 years when we discover what the damage to the environment actually is,” Coffman said after meeting with her counterparts Wednesday in Durango.

Heavy metals naturally occur in the Rocky Mountains; they get released when water enters mines, either through mining operations or from snow and rain. A chemical reaction ensues, creating sulfuric acid that dissolves heavy metals into the water, creating a toxic mess.

The spill happened as an EPA-supervised crew inspected a horizontal passageway into the partially collapsed and leaking Gold King mine. The workers dislodged some material, turning the steady flow of contaminated water into a torrent.

There are hundreds of thousands of abandoned mines nationwide, and many cause damaging pollution. McCarthy ordered EPA crews to cease field investigations of these mines nationwide while the spill is investigated.

The Gold King spill appears to be a devastating blow to the Navajo Nation, which recently negotiated water rights to the San Juan River, and plans to build a $20 million treatment plant to provide clean water on a reservation where families still haul water to more than 16,000 homes. Rex Kontz, deputy general manager for the Navajo Tribal Utility Authority, said meeting clean drinking water stands could cost twice as much now.

Navajo farmers were nervously waiting for someone to announce that it’s OK to irrigate their crops again. Just two weeks without water could wipe out their corn and alfalfa just before harvest, which represents an entire year’s salary for some farming families.

Nation President Russell Begaye said the EPA has distributed claim forms at public hearings across the Navajo Nation and urged tribal members to sign them, but he advised them to wait and make sure they’re not signing away rights to make future claims for injuries. The agency says the form must be submitted within two years of the discovery of the claim, Begaye said, but learning the extent of the damage could take much longer.

Current Colorado law requires a mining company to post a bond to cover the eventual cost of cleanup before a permit is issued to start operations, but Gold King was abandoned in 1923, before the law was in effect. In the absence of an owner, the federal government was working with local residents and the state to do limited mitigation work.

Cleaning up these messes can cost a staggering amount of money. The Summitville gold mine in southern Colorado became a Superfund site after the Summitville Consolidated Mining Co. declared bankruptcy. Contaminated water still drains from that mine, despite remediation that has cost more than $210 million, according to the EPA.

EPA spill liaison Nat Miullo suggested the danger from the spill diminished after the initial burst of tainted water dissipated, and said any future spike in contaminant levels caused by stirring up sediments would be “much, much smaller in scale.”

Neither is the U.S. Bureau of Reclamation concerned about health risks in Lake Powell, said a Colorado-based spokeswoman, Justyn Liff. She said the wastewater would fill fewer than five Olympic-size swimming pools a tiny factor for a reservoir that could fill about 6.4 million similar pools.

But there are other ways to consider the same data: Hydrologists usually measure by the acre-foot and acre-inch, and say 3 million gallons could cover 110 acres with an inch of contaminant-laden toxic sludge.

This is why environmental regulators downstream are intent on determining where the contamination settles.

“Those are some of the longer-term issues that affect humans as well as wildlife,” New Mexico Environment Secretary Ryan Flynn said.