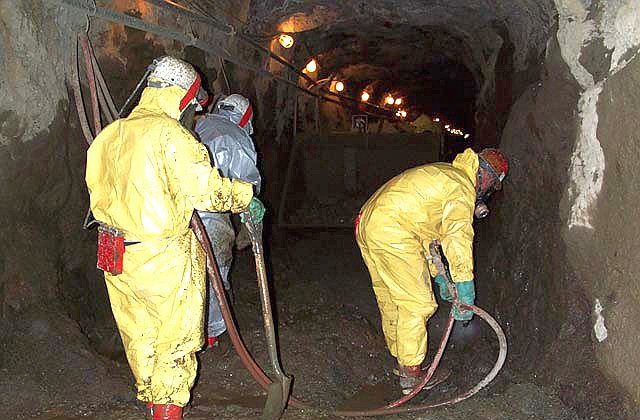 Workers remove mercury contaminated sediments from the Polar Star Mine Superfund site in this file photo. The EPA added two new sites to its priority cleanup list last week. (Courtesy of EPA.gov)
US

The Environmental Protection Agency (EPA) announced this past week that it will be adding two sites to the National Priorities List of Superfund sites. The two sites are in the heartland of Illinois and Ohio and under the federal superfund program they will be investigated and cleaned up.

The Bautsch-Gray Mine near Galena, Ill., and the West Troy Contaminated Aquifer in Troy, Ohio are the new additions to the list. Under the Superfund program they will be assessed in depth before the lengthy cleanup process.

Bautsch-Gray used to be the site of mining and milling in Rice Township, Jo Daviess County, Ill. Left behind from the long vacant operations are 40 acres of a mine tailings pile, 4.8 acres of surface impoundment, and 4.9 acres of soil contaminated with lead, zinc, arsenic, and cadmium.

The hazardous organic material was first discovered during a test in 1986.

“Protecting human health and the environment, and restoring contaminated properties to environmental and economic vitality are EPA priorities,” said Assistant Administrator Mathy Stanislaus of the EPA’s Office of Solid Waste and Emergency Response, in an Environmental News Service story March 13.

Both sites will be entered into the National Register along with an additional 8 sites recently added, with 10 more sites proposed.

The federal government’s Superfund program seeks to solve the issue of abandoned toxic waste sites across the United States. Superfund is additionally the name of the fund that was enacted by the Comprehensive Environmental Response, Compensation, and Liability Act of 1980 (CERCLA).

CERLA was enacted after the discovery of several irresponsible toxic waste dumpsites in the 1970s. The Superfund program grants the EPA the responsibility to clean up said sites while holding responsible parties accountable, either with cooperative cleanup, or monetarily.

The cleanup process is a long-term process that occurs over years—or even decades—depending on the contamination. The steps taken during the process involve: removal of toxic material and holding responsible parties accountable; local community and state involvement; ensuring the site remains protected for years to come.

“When property is cleaned up and revitalized, the reuse may result in new income to the community in the form of taxes, jobs to local residents, increases to the values of properties nearby cleaned up sites, or it may provide recreational or other services to make the community a better place to live,” Stanislaus said.

According to the EPA, 359 National Priorities List sites have been cleaned, with 1,302 still remaining on the list.