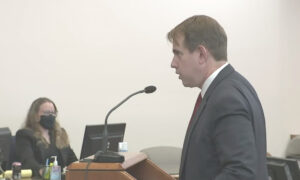 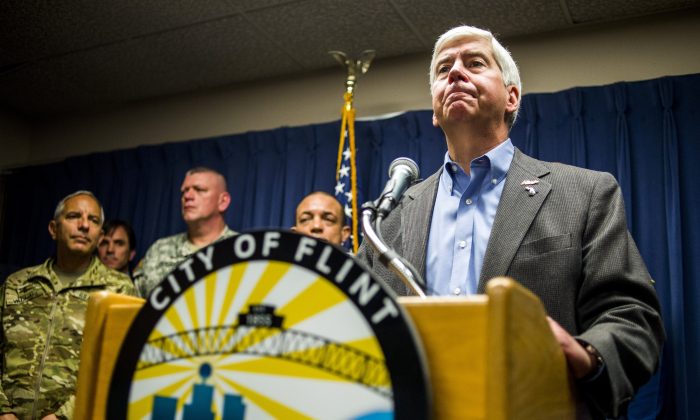 Gov. Rick Snyder speaks about the Flint water crisis during a press conference at City Hall in downtown Flint, Mich., on Jan. 27, 2016. (Jake May/The Flint Journal-MLive.com via AP)
US

Mark Pollins, director of the U.S. Environmental Protection Agency’s Water Enforcement Division, said some progress had been made toward complying with an emergency order EPA issued Jan. 21 in response to the crisis. But “significant issues” remain that need “immediate attention” to safeguard the public water supply in the city of nearly 100,000, he said.

Flint has missed by two weeks a deadline for showing that its water system has enough competent staffers, Pollins said in a letter to Keith Creagh, director of the state Department of Environmental Quality, and other officials. He also said the city and state have yet to finish a plan for preventing additional pipe corrosion, which enabled lead to contaminate some residents’ tap water.

To be clear, the city cannot switch to a new water source until there is comprehensive corrosion control plan that is fully operational.
— Mark Pollins, director, Environmental Protection Agency

“To be clear, the city cannot switch to a new water source until there is comprehensive corrosion control plan that is fully operational with optimized corrosion control treatment in place and the system has the necessary staffing and expertise to reliably operate the drinking water plant and distribution system,” Pollins said.

Melanie Brown, spokeswoman for the state agency, said it was reviewing the letter and would respond.

“In the meantime, we look forward to continuing our collaborative work with the EPA to ensure that Flint water is safe to drink and that the proper regulatory support is in place,” Brown said.

City officials did not respond to messages seeking comment.

Flint switched its drinking water source from Detroit, which draws from Lake Huron, to the Flint River in April 2014 as a temporary cost-saving measure. The city planned to join another system that also would tap Lake Huron, but its pipeline had not been completed.

Flint did not treat the river water with anti-corrosion chemicals, allowing the corrosive river water to scrape lead from aging pipes. The city returned to the Detroit system last October, but residents were exposed to lead-tainted water for 18 months.

Some children’s blood has tested positive for lead, a potent neurotoxin linked to learning disabilities, lower IQ and behavioral problems.

The state agency has acknowledged misreading federal regulations and wrongly instructing the city not to apply corrosion controls. Gov. Rick Snyder has apologized for the state’s handling of the disaster but contends federal officials also failed. Susan Hedman, former head of the EPA regional office with jurisdiction over Michigan, resigned as the agency announced its emergency order last month.

State agency Director Keith Creagh agreed to comply with the order while raising doubts about its legality. But in documents released with the Pollins letter, EPA said many of the requirements were still unmet.

Flint has 44 employees running its water treatment plant and services center although 63 are needed for effective operations, EPA said.

Although the city is now adding phosphates to its water to inhibit corrosion, it hasn’t shown that enough is being used to restore the coating that would prevent lead leaching, EPA said, adding that Flint also submitted inadequate plans for corrosion control monitoring and equipment and for sampling to measure water quality.

Other shortcomings EPA identified included failure to provide data such as lead-in-water testing results and an up-to-date inventory of homes with lead service lines and failure to identify all areas in the city where people have elevated blood-lead levels.

The documents also included a Feb. 11 response from Creagh, who said that despite EPA’s criticisms, the state had “made substantial efforts and progress toward meeting the requirements of the order.”

Also Friday, the Rev. Jesse Jackson led hundreds of protesters to the Flint water treatment plant, which the civil rights leader referred to as a “crime scene.” The mile-long march began at Metropolitan Baptist Tabernacle, where Jackson, television Judge Greg Mathis, and others spoke to a packed sanctuary before heading out into the street. The crowd chanted, “No pipes, no peace.”