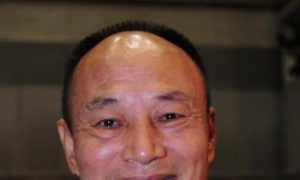 Temple President: 'There was not a single boring moment'
0

Protecting Salmon: The EPA is gearing up to enforce new label restrictions on three chemicals to prevent their use near salmon habitats in California, Idaho, Oregon, and Washington. (US Fish and Wildlife Service)
US

By Helena Zhu
Print
The Environmental Protection Agency (EPA) is gearing up to enforce new label restrictions on three chemicals to prevent their use near salmon habitats in California, Idaho, Oregon, and Washington, after chemical manufactures refused to voluntarily comply with the EPA’s initial label request.

A 2008 assessment by the National Marine Fisheries Service (NMFS), found that the chemicals interfere with the abilities of 26 species of endangered salmonoids to smell, migrate, reproduce, and avoid predators.

This represents a significant step in a 10-year campaign led by chemical watchdog organizations, Northwest Coalition for Alternatives to Pesticides (NCAP), Earthjustice, Washington Toxics Coalition, and the Pacific Coast Federation of Fishermen's Associations (PCFFA) to protect the Pacific Coast salmon and steelhead trout.

Executive director of NCAP Kim Leval told The Epoch Times that they see the EPA “taking a strong stand right now” to force chemical industries to make protective changes. She said this is not only an issue of protecting salmon but also of protecting public health.

Glen Spain spokesperson for PCFFA said that this campaign is part of a broader fight to regulate pesticides in the United States. He said that registered chemicals are often combined with "inert” chemicals, which can be highly toxic, but are not required to be labeled. The way these chemicals interact when mixed in a natural environment is synergistic—often more toxic than any one individual chemical.

A spokesperson for chemical manufacturer Dow AgroSciences, Dow AgroSciences, one of the companies refusing the new label instructions, said that “things have sort of reached an impasse right now, I guess we’ll have to see how this all works its way through.”

On its website the company says that three chemicals under discussion—diazinon, malathion, and chlorpyrifos—are “not adversely affecting any critical habitat,” and that the scientific basis for the EPA’s decision to regulate is flawed because it initially did agree with the NMFS assessment.

The EPA has announced that it is also planning to impose restrictions on three other chemicals carbaryl, carbofuan, and methomyl.