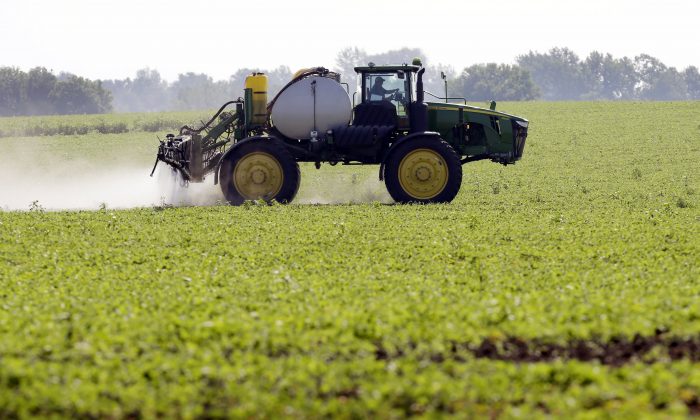 FILE - This July 11, 2013, file photo shows Blake Beckett of West Central Cooperative as he sprays a soybean field, in Granger, Iowa. Faced with tougher and more resistant weeds, corn and soybean farmers are anxiously awaiting government decisions on a new version of a popular herbicide _ and on genetically modified seeds to grow crops designed to resist it. (AP Photo/Charlie Neibergall, File)
US

WASHINGTON—The Environmental Protection Agency is taking steps to withdraw approval of a controversial new weed killer to be used on genetically modified corn and soybeans.

The EPA announced in a court filing that it had received new information from manufacturer Dow AgroSciences that a weed killer called Enlist Duo is probably more toxic to other plants than previously thought.

In a filing with the 9th U.S. Circuit Court of Appeals, EPA said it “might not have issued the existing registration had it been aware” of the new information when it originally approved the product a year ago to be used with new strains of genetically modified corn and soybeans.

EPA asked the court for the authority to reverse its decision while it reconsiders the herbicide in light of the new information, including whether wider buffer zones might be required to protect non-target plants.

The seeds are engineered to resist the herbicide, so farmers can spray the fields after the plants emerge and kill the weeds while leaving crops unharmed.

EPA’s move was welcomed by environmental and food-safety groups that had sued to rescind approval of the potent new herbicide. But it is sure to create anxiety for the agriculture industry, since many weeds have become resistant to glyphosate, an herbicide commonly used on genetically modified corn and soybeans now. Enlist includes a combination of glyphosate and an updated version of an older herbicide named 2,4-D.

“With this action, EPA confirms the toxic nature of this lethal cocktail of chemicals, and has stepped back from the brink,” said Earthjustice Managing Attorney Paul Achitoff. “Glyphosate is a probable carcinogen and is wiping out the monarch butterfly; 2,4-D also causes serious human health effects, and the combination also threatens endangered wildlife. This must not, and will not, be how we grow our food.”

Dow AgroSciences issued a statement calling for rapid resolution of the matter, citing “the pressing needs of U.S. farmers for access to Enlist Duo to counter the rapidly increasing spread of resistant weeds” and predicting that “these new evaluations will result in a prompt resolution of all outstanding issues.”

EPA’s decision means that Enlist Duo, which is currently on the market, won’t be in wide use for plantings next spring. EPA hasn’t said whether farmers already in possession of the herbicide will be able to use it, and that could be a topic for future litigation, said Andrew Kimbrell of the Center for Food Safety.

EPA had earlier said when approving the new weed killer that agency officials had used “highly conservative and protective assumptions to evaluate human health and ecological risks.” The EPA said at the time that the herbicide met safety standards for the public, agricultural workers, and endangered species.

It is the world’s most popular herbicide.

2,4-D is now used on other crops, including wheat, and on pastures and home lawns. It is the world’s most popular herbicide and the third most popular in the United States, behind atrazine and glyphosate.

Groups opposed to expanded use of 2,4-D’s say they are concerned about its toxic effects and the potential for it to drift. Corn and soybeans are the nation’s largest crops, and the potential for expanded use is huge. Critics also expressed concern that weeds eventually would become resistant to the combination herbicide as they have to glyphosate, something EPA had planned to revisit.

EPA had earlier required a 30-foot buffer zone where the herbicide couldn’t be sprayed and ordered farmers to stop spraying when wind speeds exceeded 15 miles an hour.

EPA had approved Enlist Duo for use in Illinois, Indiana, Iowa, Ohio, South Dakota, Wisconsin, Arkansas, Kansas, Louisiana, Minnesota, Missouri, Mississippi, Nebraska, Oklahoma, and North Dakota, and was likely to OK it for other states.