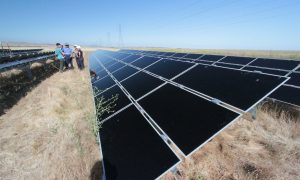 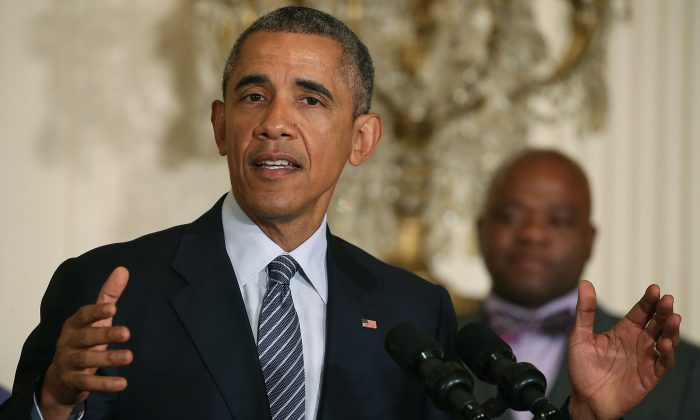 “This is really such an incredibly wicked cool moment,” EPA Administrator Gina McCarthy said during a press conference Monday, Aug. 3, to announce that the Clean Power Plan had arrived.

Just before introducing President Barack Obama, she breathed a heavy sigh of relief that after six years of hard work by many people, the president could finally introduce the plan.

The solar industry has been creating jobs 10 times faster than the rest of the economy.

The Clean Power Plan has been seriously in the works for the past two years. Speaking on a video of the press conference, posted by the White House, Obama called it, “The single most important step America has ever taken in the fight against global climate change.” Its goal is to cut carbon pollution emissions from power plants by 32 percent over 2005 levels by 2030, a 2 percent increase over the most recent version of the plan. States will now have until 2022 to comply, an additional two years.

Obama touted America’s success in cutting carbon pollution as already more than any other nation, but cautioned that there is more to do. “The science tells us we have to do more,” he warned. And by more he meant more renewable energy.

In a moment of levity, the president talked about his likely critics who will say a variety of things such as switching to renewable energy will kill jobs, referring to coal jobs. Noting that communities have been losing coal jobs for decades, Obama offered that the solar industry has been creating jobs 10 times faster than the rest of the economy.

Solar PV is the largest renewable energy employer in the world, with 2.5 million jobs, according to a May report released by International Renewable Energy Agency (IRENA).

Through greater investments in renewable energy, even more jobs are being created. States across the nation and countries have already implemented renewable energy programs that are reducing greenhouse gas emissions, putting people to work.

He also took the lead in international diplomacy and domestic actions to stimulate action around the world. The effect of these changes has resulted in a spike in solar PV (photovoltaic is a method of converting solar energy into electricity) employment in America and around the world.

The only reason that China is now getting serious about looking at its emissions is because they saw that we were going to do it too.
— President Barack Obama

Since announcing his landmark Climate Change Action Plan in 2013, the president’s administration has been working with states and power companies to ensure they have the flexibility to cut pollution, while lowering energy bills, ensuring reliable service, and providing new innovative employment.

China has been dominating in solar panel manufacturing, but according to Obama, “The only reason that China is now getting serious about looking at its emissions is because they saw that we were going to do it too.”

Solar in the United States

The United States increased its solar capacity 20-fold under the Obama administration, according to whitehouse.gov, doubling it in 2014 alone.

Through investments from the American Recovery and Reinvestment Act, signed into law in February 2009, the United States has been able to drive manufacturing and deployment of renewable energy technologies.

Programs such as payment-in-lieu-of-tax-credits, manufacturing tax credits, and loan guarantees helped to propel goals set at the beginning of the Obama administration, resulting in a 22 percent jump in solar employment in 2014 alone (from 142,700 to 173,800), with new solar installation jobs driving that growth, according to IRENA. By way of comparison, there were just over 80,000 mining jobs in the United States in 2013, according to the National Mining Association, a decrease of about 10 percent from the previous year.

In July, the administration announced a new initiative for increasing solar access to all Americans. A July 7 press release explained the administration’s commitment to scaling up solar through key components.

Part of the plan is to advance programs in renter and federal subsidized housing communities that would offer technical assistance to residents and make it easier to get solar installments. Other programs will help low- and moderate-income communities save on their energy bills.

Ambitious goals cannot be achieved without major changes to the power grid.

But these ambitious goals cannot be achieved without major changes to the power grid. Hawaii, in its race to be the first state with 100 percent renewable energy, has experienced unanticipated voltage fluctuations to its power grid, which is only designed to carry electricity into houses rather than the other way around.

In New York, Gov. Andrew Cuomo is receiving accolades for aggressively launching clean energy and solar initiatives. In 2014, he announced the Reforming Energy Vision (REV), a program that focuses on consumers using technology to reduce energy costs. He also called on utilities to generate electricity from many small energy sources linked together.

In addition, Cuomo was successful in installing 316 megawatts of solar electricity over a two-year period (2012 to 2014) through the NY-Sun initiative. The goal is to increase solar electric systems across the state by stimulating the marketplace and reducing costs for residents and businesses.

Despite these U.S. milestones, China holds the lead in renewable energy employment.

Although the United States led the charge for development of renewable energy 30 years ago, China currently leads with two-thirds of solar PV employment worldwide, and 50 percent of wind jobs.

With a decadeslong reputation for stealing technology secrets from the United States, it’s no small wonder that China keeps outpacing America in renewable energy production and jobs. In numerous media reports over the last five years, Chinese hackers employed by the Chinese government have been accused of stealing trade secrets from American companies.

As recently as June, the Chinese regime passed new legislation that would give it legal grounds for spying on U.S. technology, according to an Epoch Times report.