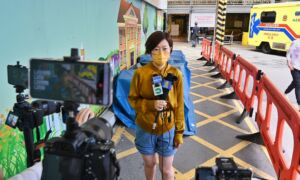 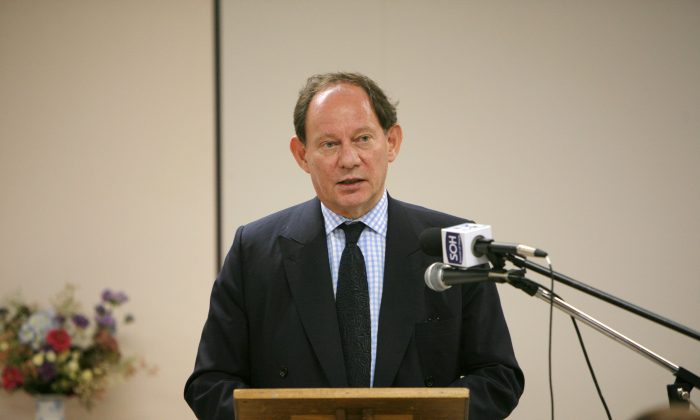 On May 21 2006, Mr. Edward McMillan-Scott MEP, Vice-President of the European Parliament and designated rapporteur for the EU’s new Democracy and Human Rights Instrument met two Falun Gong practitioners in Beijing during his fact-finding trip in China. He went to investigate in person the persecution of Falun Gong in China, in particular allegations of organ harvesting of live Falun Gong practitioners. The following is the full text of the investigation report filed by Mr. McMillan-Scott upon his return from China.

Mr. Edward McMillan-Scott MEP, Vice-President of the European Parliament and designated rapporteur for the EU’s new Democracy and Human Rights Instrument conducted the meeting with his assistant, Miss Jennifer Forrest. Also present were Mr. Steve Gigliotti, Mr. Cao Dong (aged 36), Mr. Niu Jinping (aged 52), his 2-and-a-half year old daughter and an interpreter. The meeting took place in a small anonymous hotel in an attempt to safeguard the welfare of the practitioners.

Mr McMillan-Scott explained that he had come to China to investigate the persecution of Falun Gong practitioners, in particular to find out more about allegations of organ harvesting. The meeting was filmed by Jennifer Forrest. The backs of the two practitioners were filmed and the face of Niu Jinping who had no concerns about being identified from the tape. The interpreter remained out of shot (he was arrested after the meeting and interrogated for 7 hours. Following his arrest he was ordered by the police not to contact the US embassy or the media).

Cao Dong told McMillan-Scott that he began to practice Falun Gong in 1995, before the persecution started. He was attracted to Falun Gong because of its peaceful principles and the subsequent health benefits. He claims a recurrent eye problem was cured by the practice of Falun Gong. He explained that he had been married for 4 years. 9 days after his wedding, his wife (Ms. Yang Xiaojing) was arrested for practising Falun Gong. She was in jail for two years. 1 week after she was released, he was arrested. 1 year later he was released and she was again arrested. In four years of marriage they had only been together for three weeks. In the labour camp, Cao Dong was forced to watch video tapes slandering Falun Gong for hours at a time, suffered sleep deprivation and was force-fed by the police. His wife would tell a similar tale.

Cao Dong is currently unemployed, unable to secure a job because he practices Falun Gong. He had previously been a tour guide and recounted the lies the regime had insisted he tell to tourists about Tiananmen Square etc.

In the labour camp he was instructed to manufacture jade jewelry for export to Europe and was forced to work long hours in terrible conditions. He said that out of 2,000 prisoners, 100 were Falun Gong. They were held 30 to 40 prisoners to a small cell.

He gave details of his arrest. He said he was put in a special section of the jail reserved for Falun Gong practitioners and Tibetan Buddhists. The treatment of Falun Gong and Tibetan Buddhist prisoners was far worse than that of other prisoners. The other inmates were specifically told by the police to monitor them and to deprive them of sleep. The police frequently tried to get practitioners to sign repentance statements renouncing their belief in Falun Gong. In this same jail, there were also dissidents which had been arrested during the student incident at Tiananmen Square in 1989.

Edward McMillan-Scott enquired whether he was aware of any organ harvesting camps in China. He said he definitely knew of them and knew people who had been sent to them. He had seen the cadaver of one of his friends, a Falun Gong practitioner, with holes in his body where the organs had been removed.

McMillan-Scott asked if the practitioners were in danger by meeting him. Both practitioners said yes. McMillan-Scott gave them each his business card and told them that if they ran into any problems after the meeting to call him so that he could offer some assistance.

Niu Jinping’s wife is in jail. She was still breastfeeding at the time of her arrest. She has been repeatedly tortured and is victim to relentless brainwashing techniques. She is often beaten for more than 20 hours at a time to force her to denounce Falun Gong. As a result she is now deaf. He showed McMillan-Scott a map pinpointing the location of the camp she is in. He also has a receipt for 100,000 RMB which he paid for his wife’s release from the labor camp. He also showed him an appeal letter he had written to the police for the unlawful arrest of his wife.

He described in detail the torture methods his wife has had to endure – being tied to a wooden bench for hours in a contorted position, sleep deprivation, being suspended for many hours from the ceiling with a rope around her neck and her toes only just in contact with the ground.

Niu Jinping had seen his wife for ten minutes in four months; sometimes he was told he could visit her after the visiting day.

He also showed us burns he suffered from electric batons whilst in prison and recounted his time spent in a mental hospital following accusations that he was insane. He was forced to take a strong concoction of medication. With the help of one doctor who believed that he was not insane, he was finally released.

Niu Jinping is also unemployed. In China the police must sign a document stating that you are fit for work for an employer to be able to take you on. Practising Falun Gong is considered by the regime to render you unfit for work and they therefore refuse to issue this document to practitioners. As a result he has been forced to sell his home and live off the money he received from the sale. He said he was luckier than many of his fellow practitioners who did not have a home to sell and were left with nothing to live on since in many cases their personal assets were taken by the police.

Talking about Tiananmen Square and the anniversary on June 4, Niu and Cao explained that they and other Falun Gong practitioners are routinely rounded up before any national holidays in China and interrogated by the police. McMillan-Scott asked Niu Jinping whether there was anything seditious about Falun Gong. He replied no.