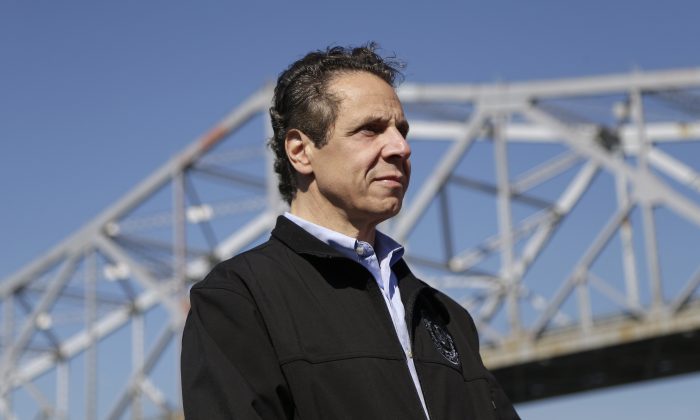 ALBANY, N.Y.—Environmental groups are suing New York state over Gov. Andrew Cuomo’s plan to use federal clean water funds on the new Tappan Zee Bridge, saying that the idea would create a dangerous national precedent if it’s allowed to stand.

The lawsuit filed in Albany by Riverkeeper, Environmental Advocates of New York and others said the state’s proposal should be stopped because the bridge isn’t eligible for the funds and because the plan was endorsed by state officials without the legally required opportunity for public input.

Cuomo, a Democrat, wants to use $511 million in federal clean water loans, which are intended to be used on sewer and drinking water projects, to help pay for the $3.9 billion bridge project.

Cuomo’s administration argues that the loans will help minimize the cost of tolls on the new span and will support efforts to make the project environmentally sensitive.

The Environmental Protection Agency has already rejected most of Cuomo’s proposal, announcing in September that it would only authorize $29 million for the project.

The lawsuit argues that none of the money should be approved for the bridge, and notes that Cuomo’s administration plans to appeal the EPA decision. Even if the state loses its appeal, advocates said they worry that Cuomo may simply ignore the EPA ruling.

They also said that if New York’s proposal is allowed to stand, other states may try something similar.

“The stakes are too high to let this illegal raid go through,” said Paul Gallay, an attorney and president of Riverkeeper, a group that works to protect the Hudson River estuary.

Messages seeking a response to the lawsuit from state officials were not immediately returned Tuesday.