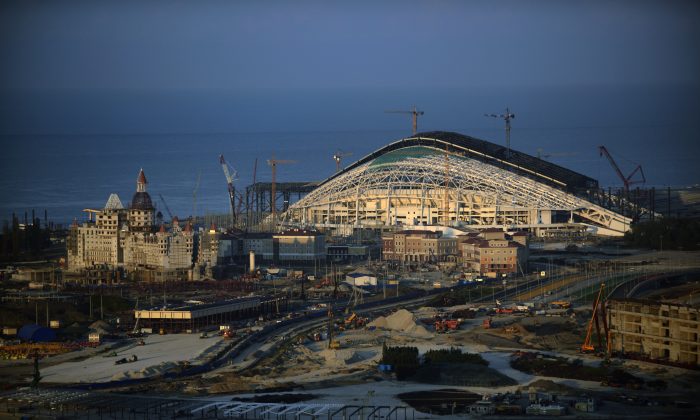 The main Olympic Stadium, the "Fish," under construction at the Olympic Park in Adler, outside the Russian Black Sea resort of Sochi, on August 22, 2013. (MIKHAIL MORDASOV/AFP/Getty Images)
Environment

Russia is reneging on a promise to compensate for environmental damage caused by construction for the 2014 Sochi Olympic games with plans to develop areas it pledged to protect, activists said on Tuesday, October 27th.

Environmental organisations had decried development for the Winter Olympics in the mountains above the Black Sea resort, where many sporting facilities were built on land within Sochi National Park.

As compensation, the Russian government agreed to put other land in the area under stricter environmental protection and include it in the UNESCO World Heritage site known as the Western Caucasus.

The region, which won the World Heritage designation in 1999, is described as one of Europe’s last large undisturbed forested mountain ranges.

However, recently Russia announced that it is retracting its formal bid to expand the site, just as international experts were evaluating the submission, several people involved in the process said.

“This is a refusal to carry out the Olympic obligations,” Igor Chestin, director of the Worldwide Fund for Nature (WWF) in Russia, told AFP.

The Russian government had vaunted the virgin wilderness areas near Sochi, with their abundance of rare and endangered species, in its proposal to have them incorporated into the World Heritage site.

But the authorities are now pushing to build in the areas, with the Russian environment ministry proposing them as sites for recreational development.

The Rosa Khutor ski resort, where some of the Olympic events were hosted, is already building roads in the area, according to the local group Environmental Watch on the North Caucasus (EWNC), which took photographs of the roadworks last month.

Rosa Khutor’s director Sergei Bachin told a meeting earlier this month that his resort plans to double in size in the next two or three years, according to the Russian Ski Association.

The expansion would affect undisturbed areas inside Sochi National Park and a wildlife sanctuary along Sochi’s main Mzymta River, which the government promised to restore after heavy downstream construction for the Olympics.

“Instead, there is ongoing destruction of the river’s ecosystem and of the unique wilderness of these areas,” EWNC said.

Under a reintroduction project supported by the Kremlin, the areas were also supposed to become a habitat for the rare Caucasian leopard, which once inhabited the Caucasus but now exists only in Iran.

President Vladimir Putin championed the project, taking  several International Olympic Committee officials to the local leopard breeding centre ahead of the Games last year. “Restoring this part of lost nature is part of our Olympics,” Putin told them.

But if the territory continues to grow as a ski resort, “this programme will be pointless”, said WWF’s Chestin, noting that it would cut off the leopards’ migration routes.