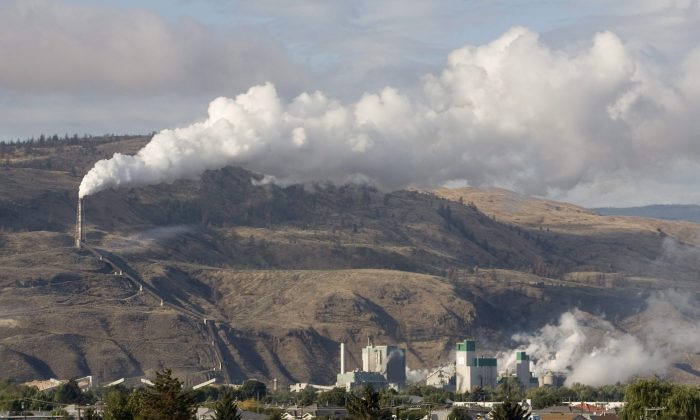 The smokestack from the Domtar pulp mill in Kamloops, B.C. A report by Environmental Defence suggests babies are exposed to chemicals in the womb because pollutants are so pervasive both in the environment and in widely used consumer products. (THE CANADIAN PRESS/Jacques Boissinot)
Canada

TORONTO—Detectable levels of a large number of environmental chemicals have been found in the cord blood of some newborns, raising concerns that Canadian children already carry toxins in their bodies at birth, a report says.

Released Wednesday by Environmental Defence, the report suggests babies are exposed to chemicals in the womb because pollutants are so pervasive both in the environment and in widely used consumer products.

“This is evidence that our babies—who are extremely vulnerable—are being burdened with a toxic chemical load before they are born,” said Maggie MacDonald, the organization’s toxics program manager.

Because a growing fetus is going through rapid cell division, exposure to chemicals is particularly worrisome, since some compounds mimic the effects of hormones that help drive development of the brain, organs, and other tissues of the body, the group said.

Environmental Defence tested the umbilical cord blood of three anonymous newborns in Toronto and Hamilton, finding a total of 137 chemicals overall. The number of toxins in each baby’s cord blood ranged from 55 to 121.

Among them were flame retardants, PCBs, PFCs found in non-stick coatings, and organochlorine pesticides.

Many of the chemicals are linked to serious health conditions: 132 are reported to cause cancer in humans or animals; 110 are considered toxic to the brain and nervous system; and 133 cause developmental and reproductive problems in mammals, the group said.

Although the sample of three newborns is extremely small, the findings are consistent with cord blood studies done elsewhere, including in the United States, said acting executive director Sarah Winterton.

While the cord blood toxins were found at low levels, “it’s important to specify that these chemicals were detected,” she said.

“One of the big ones are flame retardants, which show up in a lot of products because we have laws about ensuring that couches and curtains and pillows and things like that aren’t going to ignite or become a conduit for increasing a fire,” Winterton said.

“But what we found was these chemicals showed up in the umbilical cord blood, which means that mothers in their environment are being exposed and ingesting the chemicals.”

Also of concern was the presence of perfluorinated compounds, or PFCs, so-called chemicals of convenience that are used in non-stick coatings in frying pans and other cookware, as well as in some apparel to make it resistant to stains.

Environmental Defence also screened for 209 different PCBs, or polychlorinated biphenyls, and found 96 overall in the babies’ cord blood. PCBs, which have been linked to cancers in both animals and humans, were banned in Canada in 1977.

“What this shows is that once chemicals get out into the environment, they persist,” said Winterton. “And banning them doesn’t mean they’re necessarily going to go away.”

That’s why environmental groups want the federal government to take a precautionary approach and not allow chemicals to be used in industry or products until they are proven to be safe.

Environmental Defence is calling on Health Canada and industry to remove harmful chemicals from products.

The federal department is in the process of reviewing thousands of chemicals in consumer products, said Winterton.

“We’re asking them to keep on with the work and to set firm timelines when a chemical is proven to be unsafe and should be banned. We want these timelines to be shortened and adhered to. We want better labelling so that people can make better choices.”