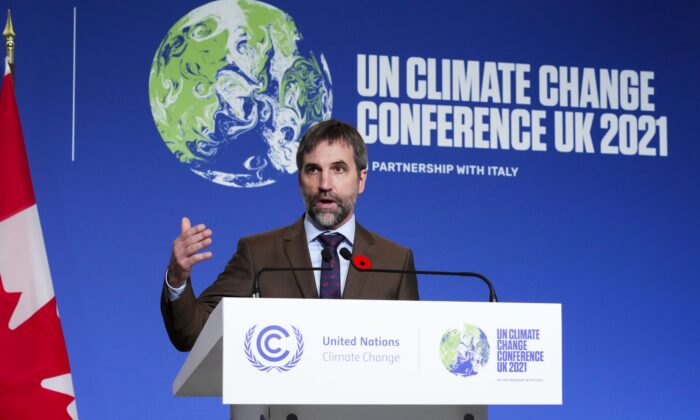 Canada’s new environment minister Steven Guilbeault has a lot on his plate as the  government seeks to tackle what it says is the existential threat of climate change.

Guilbeault received his mandate letter from Prime Minister Justin Trudeau on Dec. 16, which contains twice as many issues to pursue compared to the former minister in 2019.

“The length of the list speaks to the scale of both the challenge and the opportunity,” Guilbeault tweeted on Dec. 17.

“This is a priority for Canadians, who gave us this mandate. I’m humbled to be a part of it. On y va [Let’s go]!”

Many directives remain the same as 2019, such as achieving net-zero emissions by 2050, but the 2021 letter adds that the net-zero goal should be achieved “as soon as possible.”

Targeting methane emissions is a new measure Guilbeault is tasked with, part of the Global Methane Pledge launched at the UN Climate Change Conference in Glasgow last month. The goal is to implement regulations to reduce “oil and gas methane emissions in Canada by at least 75 percent below 2012 levels by 2030,” says the mandate letter.

The Global Methane Pledge says methane “accounts for about half of the net rise in global average temperature since the pre-industrial era.”

As for the other measures targeting the oil, gas, and coal industry, Guilbeault is required to cap oil and gas sector emissions at current levels, phase out coal “as swiftly as possible” and no later than 2030, achieve a net-zero clean electricity grid by 2035, continue raising the “price on pollution” with the carbon tax, and accelerate the elimination of hydrocarbons subsidies from 2025 to 2023.

Reacting to the mandate letter, the Canadian Association of Petroleum Producers says its industry is “leading Canada’s economic recovery by supporting over 500,000 jobs and … generating billions of dollars in much-needed revenues for government.”

“The energy supply shortages and rapid cost increases happening here and globally should be a reminder to our policymakers a climate strategy that ignores the fuels which provide more than half of all energy used in the country and around the world is not viable,” says CAPP spokesperson Jay Averill.

Some directives issued in 2019 are back in 2021, but with added measurable objectives.

Whereas expanding and diversifying urban forests was a directive in 2019, Guilbeault is asked to “establish at least one new national urban park in every province and territory, with a target of 15 new urban parks by 2030.”

The previous minister was merely instructed to “ensure that Canada’s national parks and national historic sites are a source of national pride and enjoyment.”

The plan to reduce the use of plastic is also back, but this time with more detailed objectives, such as enforcing a recycling target of 90 percent of plastic beverage containers and requiring that all plastic packaging contains at least 50 percent recycled content by 2030.

Guilbeault is not asked to be involved in the initiative to plant two billion trees over 10 years, which was a requirement in 2019, but the item is in the mandate letter of his colleague, Minister of Natural Resources Jonathan Wilkinson, the previous environment minister.

Since 2019, 0.4 percent of the two billion trees have been planted so far, according to a recent report from The Canadian Press.

The mandate letter also tells Guilbeault to work with the minister of international development to provide “climate finance” to developing countries to address climate-related issues, including supporting “small island states at particular risk of climate-related emergencies.”

There is a three-fold increase in items related to indigenous people and First Nations in the 2021 mandate letter compared to 2019, with a total of nine issues, in line with the government’s pledge to advance reconciliation.

For instance, Guilbeault is told to “identify, and prioritize the clean-up of, contaminated sites in areas where Indigenous Peoples, racialized and low-income Canadians live.”

There are other attempts to link progressive causes to environmental issues as the minister is asked to introduce legislation to develop an “environmental justice strategy” and examine the “link between race, socio-economic status and exposure to environmental risk.”