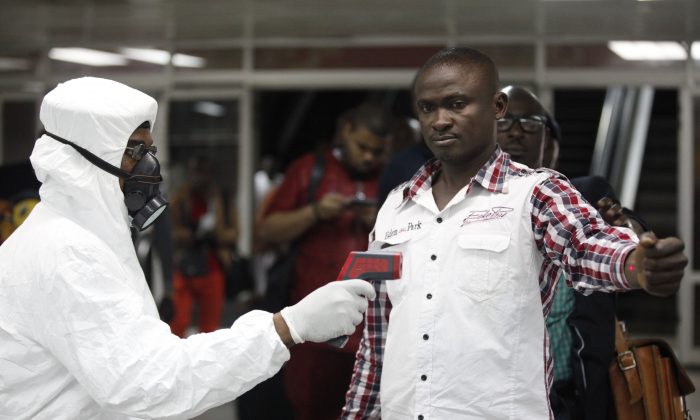 In this Aug. 6, 2014 file photo, a Nigerian port health official uses a thermometer on a worker at the arrivals hall of Murtala Muhammed International Airport in Lagos, Nigeria. As the Ebola outbreak in West Africa grows, airlines around the globe are closely monitoring the situation but have yet to make any drastic changes. (AP Photo/Sunday Alamba, File)
Africa

The Ebola virus has spread to Enugu in Nigeria from Lagos.

The disease was spread by a nurse who ignored medical advice not to travel to Enugu on the grounds of having a contact with the late Liberian Patrick Sawyer.

The nurse was rumored to be 25-year-old Obi Justina Ejelonu, but her family insisted that she had stayed in quarantine in Lagos before she died on Thursday.

Though the nurse hasn’t been identified, 21 persons, including the nurse and her husband, have been quarantined in Enugu State, the federal government said, reported the Leadership.

Almost 200 persons nationwide are under watch of health workers–177 in Lagos and the 21 in Enugu.

Labaran Maku, Nigeria’s health minister, said that the nurse who traveled to Enugu had contact with Patrick Sawyer, the Liberian government official who traveled to Nigeria for better health care but ended up spreading the disease to the country.

“All those who had primary contact have been quarantined. Secondary contacts have also been traced,” Maku said.

“Health workers are now in all our border units. All the entry points into this country and exit points, we have port health workers that are working in our airports and seaports.”

A healthcare worker prepares Ebola personal protective equipment before entering the Ebola isolation ward at Kenema Government Hospital, in Kenema that is in the Eastern Province around 300km, (186 miles), from the capital city of Freetown in Kenema, Sierra Leone, Tuesday, Aug. 12, 2014. (AP Photo/ Michael Duff)

An Iowa drug developer is preparing to test a possible Ebola vaccine in humans, as scientists race to develop ways to prevent or fight a virus that has killed more than 1,000 people in a West African outbreak.

NewLink Genetics is planning an initial phase of testing involving up to 100 healthy volunteers and is talking with regulators about the study, said Brian Wiley, the company’s vice president for business development. He declined to say whether the drug developer has submitted an application for the research to the Food and Drug Administration.

Chief Financial Officer Gordon Link said Thursday the timing of the testing, which would involve up to 100 healthy volunteers, is uncertain.

“We’re getting a lot of assistance from a number of sources to accelerate this, so exactly how long it’s going to take is a little uncertain because people are greasing the paths as much as they can,” he said.

There is no proven treatment or vaccine for Ebola, and the current outbreak, which also has sickened nearly 2,000 people, is the largest in history. The outbreak was first detected in March in Guinea and spread to Liberia, Sierra Leone and Nigeria.

Other possible Ebola vaccines under development include one developed at the National Institutes of Health that is set to begin early-stage testing in humans this fall.

NewLink Genetics Corp. is planning to test a vaccine that was discovered by scientists working for the Canadian government. The U.S. drugmaker has an exclusive license to take it through clinical trials and then sell it if regulators grant approval.

NewLink said the vaccine has been 100 percent effective in preventing deadly Ebola infections in non-human primates, and it acts quickly enough to show effectiveness in animals that received a typically lethal dose of the virus.

The vaccine contains an antigen from the Ebola virus, and it essentially teaches a person’s immune system how to fight the virus.

Researchers will be focused mainly on the vaccine’s safety in the initial round of testing, but they also will measure the antibodies the subject’s body produces to fight the virus.

“By measuring their immune response to the vaccine, you can predict the effectiveness,” Vahanian said.

The company also is working to line up manufacturing partners to make additional doses of the vaccine.

“It is not a particularly challenging vaccine to manufacture,” Vahanian said. “We are expending all our efforts to be able to secure additional manufacturing partners so we can meet high demand.”

A total of 1,500 doses have already been produced by a contract manufacturer in Germany, and the Canadian government purchased all of them. The government is setting aside some for NewLink to use in clinical research, and it also plans to donate between 800 and 1,000 doses to the World Health Organization, which is coordinating the international response to the latest outbreak.

Earlier this month, NewLink, which has no products on the market, announced a $1 million contract with the U.S. Defense Threat Reduction Agency to help fund research leading up to the human testing.

Shares of the Ames, Iowa, company soared more than 12 percent, or $2.86, to $26.30 in Thursday afternoon trading, while broader indexes climbed less than 1 percent.