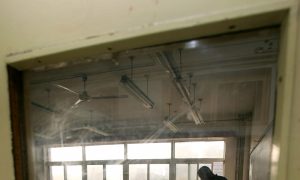 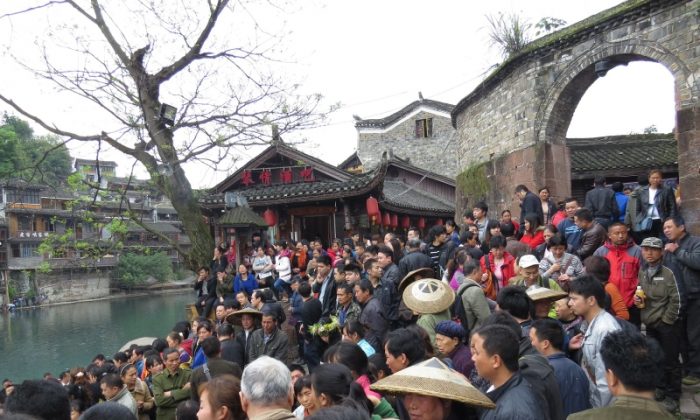 On April 11, thousands of merchants from Phoenix Ancient Town marched against the authorities’ new regulation of “charges for the entire town.” (Courtesy of source)
China

A new fee has been introduced at Phoenix Ancient Town, a popular tourist destination in Hunan Province, famous for its history and culture. It used to be open to the public, but isn’t so much now, thanks to local officials.

Legend has it that two mythical phoenixes found the village so beautiful that they kept flying over it, and were reluctant to leave. Nowadays, tourists visit to get an idea of what traditional China looked like.

Since April 10, every visitor to the village has had to purchase a 148 yuan ($24) ticket, even if they have only come to see family. That levy is over a third of rural monthly disposable income. The new regulation has dramatically reduced the number of tourists coming to the town, upsetting local merchants and shop owners.

Mr. Long, a resident, told The Epoch Times that the number of customers has dropped significantly. “Generations of people have lived in Phoenix Ancient Town, and now visiting friends and relatives have to buy tickets; this is unacceptable,” he said. “It is affecting the jobs of tens of thousands of people.”

The day after the fee was introduced, thousands of merchants formed a parade to demonstrate against the authorities’ new regulation of “charges for the entire town.”

Another local, Mr. Ma, told The Epoch Times that even tourists joined in. “Nearly all the shops were closed with the business owners participating in the parade, because the vendors object strongly.”

Up to 500 riot police and urban law enforcers arrived, arresting over 10 protesters and beating some of them, according to a resident called Mr. Long.

A businessman from another area named Mr. Huang added: “At the time, the scene was very messy, and a female ferry pilot was even bashed until she bled. We are a vulnerable group, so we had no choice but to demonstrate.”

Official reports claimed that the local government is entitled to more than 40 percent of the money generated from ticket sales, as it allegedly lacks funds and is “not doing well,” according to Zhen Jun, the secretary of Fenghuang County Tourism. The local people’s reaction is that the communist authorities are simply stealing money.

“The government only has two main agendas: money and girls,” blogged Cao Junshu, a writer from Anhui Province. “Even though the government is so shameless, it still pretended that it was in the tourists’ best interests. They rape someone and say that it was to make that person comfortable; this is the general and pervasive logic of a regime that is completely obsessed with money.”