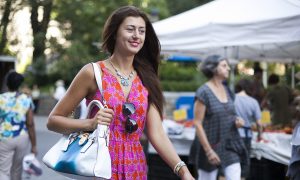 Do You See What I'm Wearing? How Clothes Reveal Who We Are
0
Share Now
TelegramFacebookTweetEmailTellMeWeReddit
Copy Link 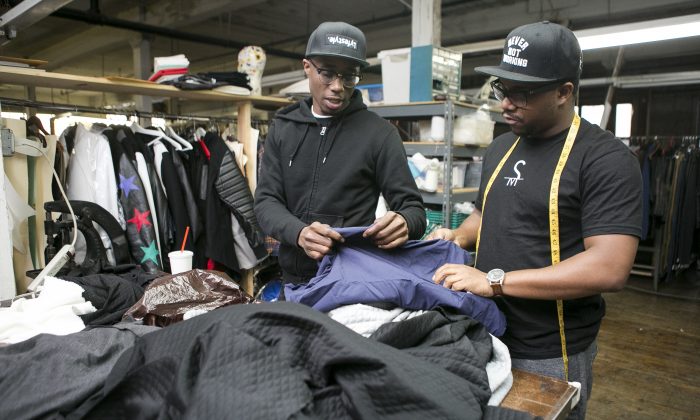 Clinton Ballard (L) and John Oliver, co-founders of Brooklyn Alchemist Station, at their clothing factory in Brooklyn on March 1, 2015. Their startup makes it easier for small designers to manufacture products in the U.S. (Samira Bouaou/Epoch Times)
New York

NEW YORK— Two spiffy African-Americans—Clinton Ballard, a 10th grade chemistry teacher, and John Oliver, a former FedEx manager—work after hours as a salmon sun sets on the Brooklyn skyline. There is much work to be done in their Bushwick clothing factory. They are producing a spring and summer line for a boutique. And they do everything themselves.

They find the fabric, sketch the design, develop a pattern, cut the fabric, and sew it all up into sleek button-up shirts, hats, and varsity jackets.

Ballard and Oliver are the founders of Brooklyn Alchemist Station, a small menswear  factory. Apart from running their own clothing lines—Oliver New York, and Lifestyle—they produce small amounts of clothing (around 30 to 40 items a week) for other designers and provide advice for new designers.

They are a small company that is going against the grain.

According to a report put together by the New York City Economic Development Corporation and the Municipal Arts Society, there are 900 fashion companies headquartered in New York. But most companies have their clothing manufactured in cheap and often dangerous factories in countries like China or Bangladesh.

It’s all the more reason that manufacturing needs to make a comeback in the United States.

And Brooklyn, of all places, is the place where it will come back, Ballard and Oliver firmly believe.

Just outside the Brooklyn Alchemist Station, there are old rail tracks and abandoned warehouses.

“But I don’t know if manufacturing is ever going to come back here,” said Robin Sackin, chair of the Fashion Merchandising Management department at the Fashion Institute of Technology. Considering consumers’ tendency to prefer cheap prices, clothing retailers are likely to continue outsourcing to low-cost suppliers.

“Who knows, maybe they can develop something. My hat’s off to them for trying to do this,” she said. “It has to start somewhere to bring the manufacturing back.”

Ballard, 29, a Brownsville-native, is the first in his family to go to college. He holds two masters degrees—one in drug regulatory affairs, another in teaching.

Oliver, 26, was raised in Bedford-Stuyvesant, Brooklyn, by an aunt who was a seamstress in a curtain factory.

Ballard and Oliver don’t come from the most affluent backgrounds. They both could have better paying jobs, but they ardently believe in their cause.

And there is hope because at least they’re not alone.

There’s been an increase in interest in turning Brooklyn into a manufacturing innovation hub.

Manufacture New York, a makerspace in Midtown where designers go to make their starts, is currently working on creating a fashion innovation hub in Brooklyn. This fashion hub is a 160,000-square-foot floor space at Liberty View Industrial Plaza, and it has a $3.5 million grant from the New York City Economic Development Corporation.

Ballard and Oliver have been in business since January, and currently have 5 consistent clients.

During the day, while Ballard is talking about the periodic table with teenagers, Oliver holds down the fort at their factory.

He goes through the yellow clasp envelopes that hold unborn designs of motorcycle jackets and short sleeve shirts. There’s a flimsy piece of paper that is the measurement for the arms. Ballard and Oliver will transfer the designs to hard paper one of these days.

Their sewing machines—three single-threads; a coverstitch; and two button hole apparati—produce clothing for seven designers. And they’re all Jukis, the best of its machine kind.

The oldest sewing machine they use is a faded mint green Reece from the ’40s.

They receive help from their three main seamstresses and cutters, and four sewers on contract, where they work in a small corner of a warehouse they share with Knickerbocker Mfg. Co., a manufacturing company that specializes in leather goods for private labels.

Oliver picks up a black cotton and poly blend piece of material with a quilted texture. “It’s all about the textures right now,” he said. “That smooth, cool material that won’t feel hot against the skin.”

One yard of wax denim costs $20 in New York, but $6 in California. So they brought 10 yards back to Brooklyn.

It’s sad, but you have to do things outside of New York as much as possible,” Oliver said. “But at least everything is made in the U.S.”