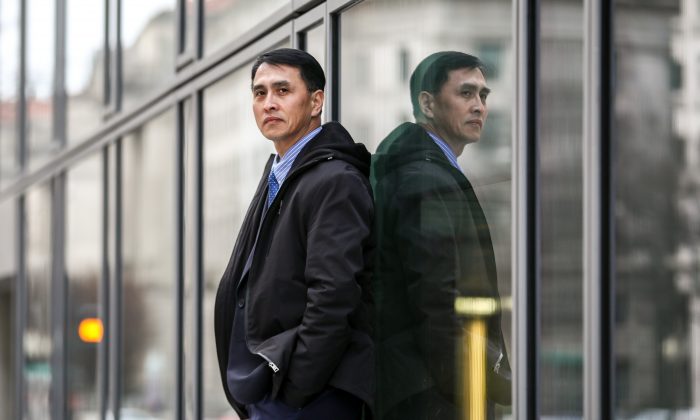 Yu Ming in Washington on Feb. 19, 2019, shortly after arriving in the United States. At one stage during his 12 years of imprisonment in China for practicing Falun Gong, during the 2008 Beijing Olympics he hatched a daring plan to expose torture and abuse at the notorious Masanjia Forced Labor Camp. (Samira Bouaou/The Epoch Times)
China Human Rights

Around the time of the Beijing Olympics in the summer of 2008, Yu Ming was bedridden in a hospital affiliated with the notorious Masanjia Forced Labor Camp after having suffered severe torture.

In fact, the torture inflicted on the successful entrepreneur over his 12 years of incarceration in Chinese labor camps and jails was so relentless and extreme that it’s hard to understand how he survived.

He was repeatedly shocked with high-voltage electric batons—including on the genitals—and locked for three months inside a small iron cage in which he could neither stand nor sit. He was hit in the head with an iron bar that left him comatose for a week. He was forced to perform hard labor, beaten and stomped on, violently force-fed after protesting with a hunger strike, exposed to the hot sun for extended periods of time, hung up by the wrists for several days in a row, and confined in a solitary cell. These are just a few examples.

Several times he was close to death. At one stage, after being tied to a chair by the neck, chest, hands, and legs for months at a time, Yu suffered two heart attacks. His weight dropped drastically and his muscles atrophied to the point that he could no longer keep his back straight without assistance or raise his arms and hands.

And it was all merely because he practiced Falun Gong, or Falun Dafa, a traditional meditation discipline based on truthfulness, compassion, and tolerance whose adherents have been victims of a brutal persecution campaign launched by the Chinese regime in 1999.

Now, as he lay in his hospital bed, Yu had a strong urge to somehow expose the torture that was part of China’s preparations for the Olympic Games. He saw that more and more people were arriving at Masanjia, having been sentenced for “planning to commit robbery” or “preparing to steal.”

Inside the camp, the guards stepped up their efforts to “transform” Falun Gong practitioners: forcing them—by any means necessary—to renounce their beliefs, identify others who practiced Falun Gong, and profess loyalty to the Chinese Communist Party.

Yu couldn’t bear to see more innocent people suffer such inhumane treatment. In addition, he thought the world should know that, instead of improving its human rights as expected by the international community after being awarded the Olympics, the regime was persecuting and even killing people because of the Games. According to Minghui.org, the rate of arrests of Falun Gong practitioners greatly increased ahead of the Olympics, with many ending up tortured to death or badly injured.

So he hatched an elaborate plan to help two fellow Falun Gong adherents escape and try to get in touch with foreign journalists who were in Beijing to cover the Olympics, hoping the brutal situation in the camp would garner attention and bring about change.

A Daring, but Brief, Escape

Yu needed certain items to get his plan off the ground. Due to lax security at the hospital, he managed to get his hands on a cellphone, some cash, and, most importantly, a saw blade.

As many labor camp inmates would often be sent to the hospital and then taken back to the camp, through painstaking communications and complicated calculations, Yu was able to coordinate the escape.

He found people on the outside to come to the two escapees’ aid after they fled the camp, and he found another person to rent a place for them to hide while the police would be searching frantically for them.

The plan was put into action on Aug. 11, 2008. The Games were already in full swing, having begun three days earlier. Using the saw, the iron bars in a cell window were cut and then bent, and the two practitioners slithered down from the third floor using a rope made from a quilt.

Initially, everything went smoothly. They were picked up at the right time and right place by the right people, until … the person who was meant to rent the place for them to stay didn’t show up. Nobody knew what had gone wrong. Yu had to arrange to have his wife, Ma Li, pick up the two escapees and hide them at his home, knowing very well how risky that was.

Three days later, hundreds of policemen, some armed with guns, surrounded the area near Yu’s home and took away the two escapees, as well as Ma.

The escape attempt during the Beijing Olympics from a “model” labor camp infuriated the highest leaders of the communist regime. The escape was classified as a “major incident”; at least seven police officers were fired, and two deputy directors of the camp were punished.

Yu and the two escapees were tortured ferociously.

Yu was hung to a door, with his arms stretched up, and his feet hardly touching the ground. He was hung in this position for over a month, day and night. Sometimes, he could be released when he needed to relieve himself; sometimes, the police wouldn’t release him. So he took as little as possible of the food or water that was pushed into his mouth.

The other two were tortured more viciously, Yu said. The labor camp was given a two-death quota after the escape try, which meant that two persons could be tortured to death without repercussions.

In addition to being tortured nearly to death, each of the three people involved was given another year at the camp. Sadly for Yu, if he hadn’t planned the escape, he could have been released in about 20 days.

Asked whether the attempt was worthwhile, especially given that it didn’t succeed, Yu replied without hesitation: “Yes, it was.”

“We had to do it,” he said. “More than 10 fellow Falun Gong practitioners around me had already been tortured to death. How could you measure the value of lives? I never regret risking my life to prevent more killings.”

Finding Freedom in the US

Yu was released in 2017, and at the end of 2018 he escaped to Thailand, where he was able to obtain a visa to the United States. His wife had already gained refugee status from the U.S. government.

On Jan. 27, after nearly 12 years of torture and abuse in China’s prison system, he joined his wife and children in San Francisco.

And he didn’t leave empty-handed.

Before escaping to Thailand, Yu gathered a collection of evidence—ranging from official documents to secret videos recorded on a hidden camera—that give firsthand accounts of the ongoing Falun Gong persecution in China. The evidence also included new information on the “re-education camps” in the Xinjiang region where large numbers of Uighur Muslims are being detained.

Had he been caught with this evidence he would most certainly be back in prison and would likely never see his family again. But he made it and is now doing all he can to help expose the abuses he both suffered and witnessed.