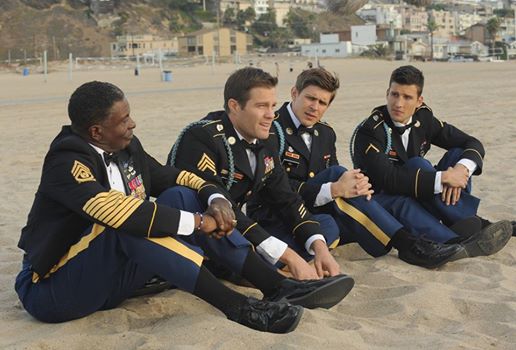 Enlisted Season 2 Renewal? NBC Show Cancelled; Netflix or Hulu to Pick It Up?

Enlisted on NBC has been canceled by the network as it wrapped up season 1 on June 22.

The show, which went on hiatus after premiering on January 10, will wrap up its 13-episode first season with the season and series finale on Sunday night at 7 p.m.

Show creator Kevin Biegel said that the finale “culminates in a very satisfying way” for fans, looking into how Sgt. Hill (played by Geoff Stults) has changed.

“His emotional arc culminates in very satisfying way to all of us, and it’s heavy but uplifting and real and honest,” Biegel told ABC. “And in the course of one season finale we get to sum up all the things we all loved about the show as well as providing the exact kind of finale to a season we all hoped the show could pull off. “

He said that a season 2 would have introduced the Hill’s mother, seen Randy progress, and see all the Hill brothers date, among other things.

He also said that the show’s episodes will go to Hulu, prompting speculation that a season 2 might happen with the help of Hulu or Netflix.

“Since Netflix revived FOX’s cult favorite sitcom Arrested Development and Kickstarter raised funds for a film version of the CW’s teen mystery Veronica Mars, fans of television’s prematurely-axed shows are no longer content to simply watch their new favorites go gently into that good night. Now every time a freshman show is cancelled, one question immediately arises: will another network give it a chance? Sometimes this wishful thinking pays off,” said Bustle.

However, the blog notes that there is no word of either company reaching out to try to keep Enlisted going.

See a season 1 finale description below:

“The Hill brothers celebrate Pete’s one year anniversary of almost dying in Afghanistan, otherwise known as his ‘Alive Day.’ After the funding has been cut for the annual ball, which was going to honor Major Cody, Pete enlists the platoon to create their own ball to honor him.”