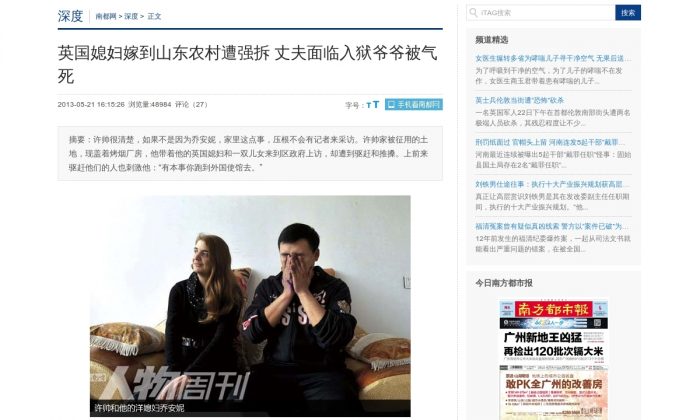 Joanne Xu and Xu Shuai (Xu is the surname) are pictured in the article about their plight first published in Southern Metropolis Daily. The two have been caught in a Chinese land dispute involving corrupt officials, land grabs, and petitioning -- a path for seeking redress for official injustice in China. (Screenshot via The Epoch Times)
China

Their story was reported in the Southern Metropolis Daily on May 21. Joanne met her husband Xu in Russia in 2009, and they got married overseas. Xu is 28, and comes from a farming family in Weifang. He studied veterinary science, and speaks Russian and English. After three unsuccessful attempts to apply for a U.K. visa for Xu, the couple decided to go and live with his family in Dongwangsong Village.

In 2011, Xu’s father received a phone call from the District Party Committee, saying his farmland was being acquired for 700 yuan per Chinese acre ($696 per acre).

As each Chinese acre yielded 1,500 to 3,000 yuan a year, Xu’s father tried to negotiate for higher compensation at 1,500 yuan per acre. However, the bureaucrat replied, “If you do not turn over the land in three days, we will arrest you.”

Xu tried telephoning the municipal hotline, the public security bureau, and the land bureau to complain, but the office staff said nothing could be done unless the family provided evidence.

As Joanne had gone back to England to give birth to their daughter, overseas media heard about the family’s dilemma, and wanted to interview Xu. However, the local authorities told him to keep quiet, and promised to leave the family’s land alone for the time being.

A year later, Xu’s grandfather wanted to build a house on his own land, so the family paid 200 yuan to submit a building application, and were allowed to proceed.

“However, when the house was half built, the authorities sent people to rip it down right in front of my grandfather,” Xu told the Daily. The men said that the land had already been sold, and started arguing with Xu’s family at the construction site. When one of the men insulted Joanne, who was pregnant with their son, Xu kicked him, and was later charged with assault.

Xu’s grandfather became seriously ill at the time of the incident, and passed away two months later, just a few days before his great grandson was born.

The couple then went to the Weifang City Complaints Bureau, where they explained what the family had gone through. Xu told the Daily the response they received: “They said, ‘If you’re so capable, why don’t you complain to the British Embassy?’”

That night, Xu’s family were attacked in their own home by strangers, but when he called the police, they just said, “Xu Shuai, don’t stir up any more trouble. You’ve already got an unresolved case on your record.”

Around the time of the Qingming Festival in April, Xu and Joanne tried to petition the district government again, but were forced to leave, and onlookers accused him of using his “foreign” wife to attract attention.

After all these bad experiences, Joanne has become fearful, and worried about her family. Although she wants to go back to England, she has chosen to stay behind for her husband’s sake. “My wife is not stupid,” Xu told the Daily. “She knows that if she leaves, I will be arrested.”

Xu is now conflicted about his family’s future, as there are consequences whatever decision he makes. While his wife and daughter can easily go back to England, his son was born in China and needs an exit visa to leave the country. Immigration policies in the United Kingdom have become stricter, and Xu may not meet the requirements.

He is also concerned about leaving his parents behind, who want the young family to stay in the village. They say the children are their only happiness, but Xu knows his children would have a better future in England.