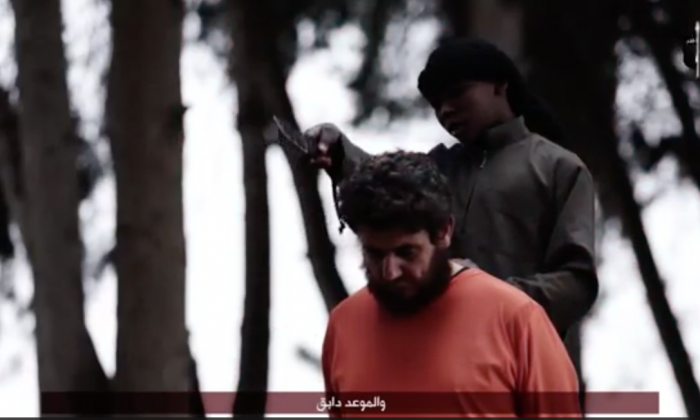 Pointing his sword at the camera, the child soldier says, “Hey America, these are the soldiers you armed and you spent money on to fight the Sharia of Allah. We will destroy them as we destroyed the Sahawat of Iraq. You can’t escape.”

The boy is likely referring to the United States having spent hundreds of millions funding rebel fighters in Syria. Sahawat, or “awakening” in Arabic, refers to indigenous anti-ISIS groups that have sprung up in ISIS territory.

The boy adds that ISIS and its enemies will “meet on the hills of Dabiq,” a small Syrian town believed by ISIS to be the location of a prophesied battle that will trigger the apocalypse, the BBC reports.


He then beheads the prisoner, robed in orange.

The full 17-minute video features a lengthy interview of the executed prisoner in Arabic, and is interspersed with footage of the rubble of besieged cities in Syria or Iraq, ISIS soldiers, and footage from the 2005 historical drama “Kingdom of Heaven,” which has been previously used in ISIS propaganda.

#ISIS PR Fail:
Take Kingdom of Heaven pic
Swap Crusaders for #IS
Get Arabic Back-To-Front on own flag@_youhadonejobpic.twitter.com/gRBEr0PAQq

This is not the first time ISIS has released a video of a child soldier executing a man. In December, they released a compilation of ISIS child soldiers killing prisoners with guns.