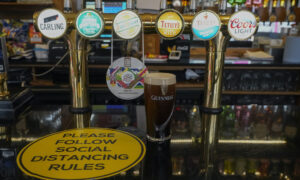 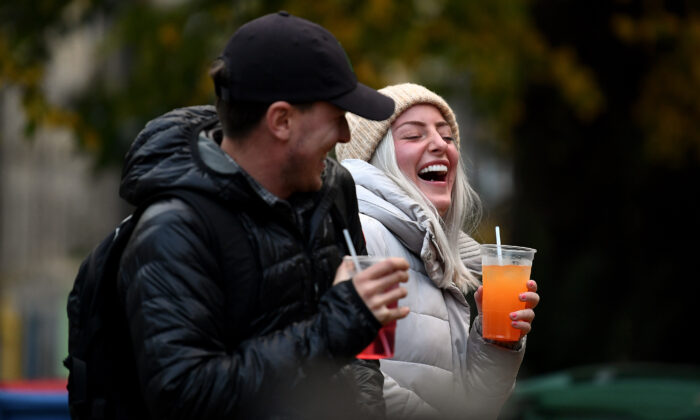 A couple drink from takeaway glasses outside a pub in the Grassmarket following last orders at 6 p.m. in Edinburgh, Scotland, on Oct. 9, 2020. (Jeff J Mitchell/Getty Images)
UK

English landlords want to be allowed to continue selling takeaway pints through the impending national lockdown, amid suggestions that one in four pubs may never again open their doors.

The lockdown rules, which face scrutiny by a parliamentary vote on Wednesday, would allow restaurants and pubs to provide takeaway food, but not alcohol.

During the pub closure of the first lockdown, some landlords sold takeaway pints for people to drink in nearby parks and commons.

“Offering alcohol for takeaway was a lifeline for many pubs, and particularly breweries, during the first lockdown in England,” Nik Antona, chairman of the Campaign for Real Ale, said in a statement. “It is a baffling and damaging decision to remove this option, particularly when other businesses such as supermarkets can continue to sell takeaway alcohol.”

“Pubs and breweries were already reporting losses and the risk of closure before Christmas, and this will only add to the risk of permanent closures within the next few months,” Antona added.

In some regions under Tier 3 restrictions, landlords had branched out into selling bottled alcohol products.

Pubs were shut for three-and-a-half months during the national lockdown in the spring aimed at curbing the spread of the CCP (Chinese Communist Party) virus, commonly known as the novel coronavirus. They opened again in July.

After the lockdown was lifted, in the summer the pub industry had just started to bounce back to near-normal levels of sales in some places, before further restrictions were introduced.

Following the introduction of the “rule of six” and the later three-tier system, brewery Marsten’s said it was going to have to axe around one in six of the jobs that had been put on ice by the furlough.

Emma McClarkin, chief executive of the British Beer & Pub Association (BBPA), said the while they recognised the spread of the virus was serious, the industry needed more support than during the first lockdown to survive another one.

“Make no mistake, this could be the final straw for thousands of pubs and brewers,” she said in a statement on Oct. 31. “It will also create major disruption to our supply chain partners whose businesses are now also at severe risk.”

The BBPA represents 20,000 pubs and 90 per cent of the beer-brewing industry,

According to the Telegraph, the association said that one in four pubs could be permanently shut due to the latest measures.

Writing to Cabinet Minister Michael Gove, CAMRA said that the ban on was unfair and “without evidence or explanation”.

“This is a move that will only benefit supermarkets and off-sale retailers, at the expense of community pubs and local brewers,” the letter states.

The BBPA last week said a survey showed just 1 out of a 100 pubs said they had been linked to an incidence of COVID-19 picked up by the NHS Test and Trace system.

“Public Health England’s own data shows hospitality was most recently linked to just 2.7 percent of COVID-19 incidences,” a spokesperson for the BBPA, UKHospitality, and British Institute of Innkeeping said in a statement.