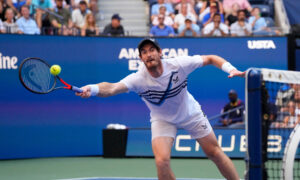 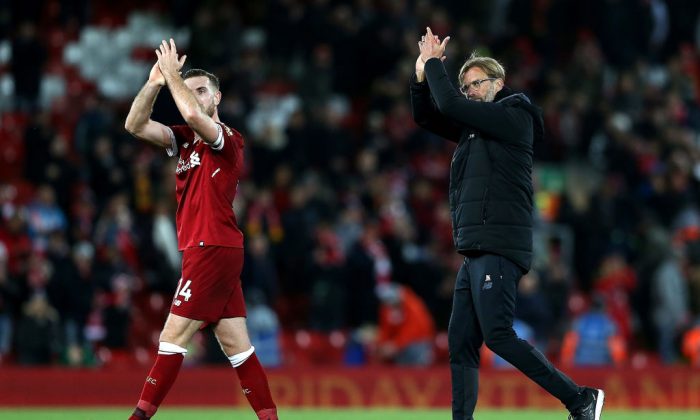 Manager Jurgen Klopp (R) and Jordan Henderson (L) of Liverpool applaud supporters after their 3-0 victory in the Premier League match between Liverpool and Southampton at Anfield on Nov 18, 2017 in Liverpool, England. (Jan Kruger/Getty Images)
International

English Premier League Round Up

Liverpool manager Jurgen Klopp was admitted to hospital on Wednesday afternoon with a mystery illness, but returned home on Thursday with a clean bill of health, before appearing at the press conference on Friday related to the visit of Southampton to Anfield on Saturday.

Everton continue with temporary manager David Unsworth having had their request to speak with Watford’s Marco Silva about becoming their new manager turned down, and Sam Allardyce withdrawing from consideration after declining to be considered for the option of a potential short term contract. Subsequent reports indicate that Everton may be continuing to chase their target, which could trigger a large buyout fee.

Spurs trio Harry Kane, Dele Alli, and Harry Winks, having withdrawn from England’s matches against Germany and Brazil, returned to the Spurs’ squad to be available to face Arsenal for Saturday’s north London derby.

Newcastle were rumoured to be edging closer to a takeover, though there is doubt as to whether the deal could be completed in time for the new year.

Zlatan Ibrahimovich has been back in training for 3 days this week with Manchester United’s squad, 7 months after incurring a serious knee ligament injury during a Europa League game last season, before United went on to lift the trophy in May. Manager Jose Mourinho introduced the striker with 13 minutes remaining after his inclusion in the squad for the visit of Newcastle, much to the delight of United’s supporters. Mourinho was also looking to welcome back defender Marcos Rojo who was injured in the same Europa League match as Ibrahimovich, but is agitated by the loss of defender Phil Jones due to injury incurred during England duty, particularly his divulgence of the requirement of Jones to receive painkiller injections prior to the friendly match, before coming off with an injury after 25 minutes of the game.