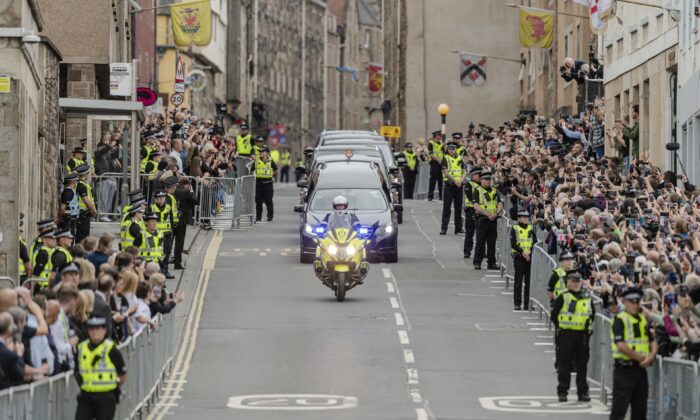 The hearse carrying the coffin of Queen Elizabeth II, draped with the Royal Standard of Scotland, passing along the Royal Mile, Edinburgh, on Sept. 11, 2022. (Euan Cherry/Scottish Daily Mail via PA Media)
UK

Conservative MP David Davis has written to Scotland’s chief constable to express his concerns about an impingement on free speech after anti-monarchy protesters were arrested in Edinburgh.

Davis wrote to Sir Iain Livingstone, head of Police Scotland, after a 22-year-old woman was arrested and then charged with a breach of the peace after holding aloft a placard which said, “[Expletive] Imperialism: Abolish the Monarchy” outside St. Giles’s Cathedral in Edinburgh on Sunday when King Charles III was being proclaimed as monarch.

It has since emerged that a 22-year-old man was also arrested on the Royal Mile in Edinburgh after heckling the royal procession.

On Tuesday the Metropolitan Police confirmed the public “absolutely have a right of protest” about the monarchy in the wake of the death of Queen Elizabeth II, whose funeral is due to take place on Monday.

They issued a statement after a viral video showed barrister Paul Powlesland being confronted by police officers when he held up a blank piece of paper in Parliament Square in London.

Powlesland said one officer asked him for his name and address and told him he would be arrested if he wrote “not my king” on the paper.

In his letter Davis, the MP for Haltemprice and Howden in Yorkshire, said: “It is not for me to interfere in the judicial process. However, with the accession of our new monarch, I would hope that the police will continue to respect the right to free speech.

“If the individual concerned committed acts of violence, or the police had reason to believe she would, then action was obviously necessary. But if the individual was simply stating an opinion, I trust you agree that a liberal approach would be desirable,” he added.

On Tuesday he wrote on Twitter: “At a time of national mourning, we should all ensure that we behave respectfully. But we must not sacrifice the principle of free speech upon which modern Britain is built. I am a staunch monarchist, but republicans have as much right to voice their opinions as anyone else.”

Joanna Cherry, the SNP MP for Edinburgh South West has also raised concern over the arrests.

The MP and SNP spokesperson on home affairs wrote on Twitter: “I’m concerned by reports in Scotland & England of seemingly legitimate protesters being arrested. Whilst many might question whether this is an appropriate time for such protests, the right to protest is fundamental to our democracy & should be facilitated.”

Thousands of people are expected to queue up to see the Queen lying in state, ahead of her funeral.

On Wednesday the Met’s Deputy Assistant Commissioner Stuart Cundy said: “We know there are some people who want to protest on a range of issues even at this time of national mourning. People have a right to freedom of expression and we must balance the rights of protesters with those of others who wish to grieve and reflect.”