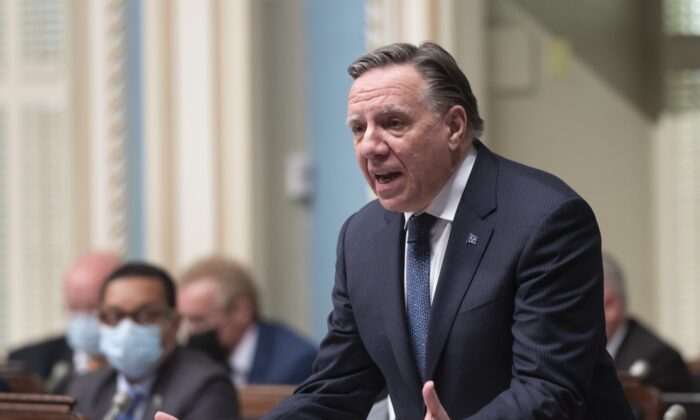 Quebec Premier François Legault responds to the Opposition during question period, at the Legislature in Quebec City, May 12, 2022. (The Canadian Press/Jacques Boissinot)
Canada

An English-language leaders debate that was scheduled to take place ahead of Quebec’s October election has been cancelled after Premier François Legault refused to participate.

The other three parties in the legislature, however, had said their leaders would participate.

A spokesman for Liberal Leader Dominique Anglade said earlier in the day that she was planning to attend to the English debate regardless of who else refused to show up.

Quebec Conservative Party Leader Éric Duhaime said he too would debate in English, and Québec solidaire spokeswoman Sandrine Bourque said the party’s candidate for premier, Gabriel Nadeau-Dubois, planned to be there even if the CAQ and the PQ wouldn’t be.

The leaders of Quebec’s four largest parties, including Legault, participated in an English-language debate ahead of the last provincial election in 2018. It was the first English-language leaders debate in the province’s history.