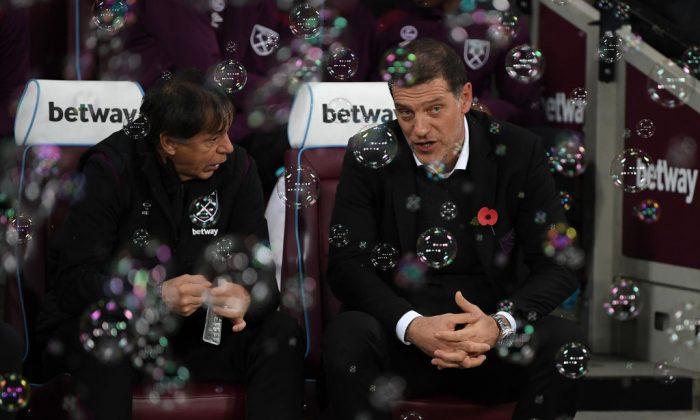 Slaven Bilic, Manager of West Ham United looks on prior to the Premier League match between West Ham United and Liverpool at London Stadium on November 4, 2017 in London, England. Bilic lost his job on Monday Nov 6 after this 4-1 defeat. (Shaun Botterill/Getty Images)
International

Monday’s (Nov 6) dismissal by West Ham of manager Slaven Bilic following the dismal 4-1 home loss to Liverpool at the London Stadium, comes as the culmination of a run from the start of the season that only yielded 9 points, which left them in the relegation places. Although it was not totally unexpected, given that Slaven Bilic’s position was under review, it is slightly out of character for the owners, David Gold and David Sullivan, to sack one of their managers. Though West Ham’s fortunes have been somewhat of a rollercoaster, particularly after his first season when they finished seventh, but never having really recovered from the forced sale of Dmitri Payet, who had been one of the EPL’s most creative players before his departure. Ex-Everton and Manchester United manager David Moyes was appointed as Bilic’s replacement, though his 2 and a half year contract is thought to have a clause that can be triggered at the end of the season if the desired results are not achieved.

Speculation now shifts to other managers who could be under pressure due to unsatisfactory results from the owners’ perspective.  With 4 managers having been replaced after only 10 games of the season to date, it will be no surprise if others follow before the January transfer window opens. Everton have yet to name their manager to replace Ronald Koeman, and it remains to be seen whether David Unsworth’s temporary tenure has been deemed to be enough to secure him an extension following the come from behind 3-2 win over Watford at Goodison, but any manager in the bottom half of the table is likely to feel under pressure if their team approaches, or falls into, the relegation places.

Amazon have an agreement to follow Manchester City’s fortunes this season, somewhat to the consternation of rights holders Sky TV and BT, though Pep Guardiola has refused cameras access to the changing room before any games, or during half time team-talks, and supposedly, part of the deal is that the series can not be shown until the season has finished.