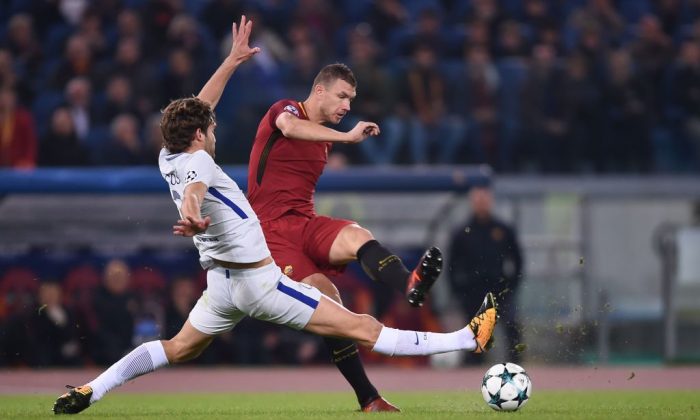 The leading EPL teams returned to Champions League action this week with Chelsea travelling to Rome on Tuesday where they suffered a first defeat in this year’s competition, going down to a 3-nil defeat to Roma who scored through a brace from Stephan El Shaarowy and another from Diego Perotti, who now lead their group, a point ahead of Chelsea, though both should qualify for the knock out stage unless Atletico Madrid rediscover their form against both sides in their remaining fixtures.

Manchester United entertained Portugal’s Benfica, and eventually collected their fourth consecutive group stage victory 2-nil, courtesy of a late first half goals when Nemandja Matic’s shot had rebounded into the net from the back of goalkeeper Mile Svilar after hitting the post, and a second half Daley Blind penalty, the kicker having been nominated after Anthony Martial had had a first half penalty saved by keeper Svilar, and are now through to the group stage, and requiring a solitary point from their last two games to go through as group winners. While Scotland’s Celtic bowed out with a 1-2 home defeat in their return with Bayern Munich, with Callum Mcgregor’s equaliser sandwiched by the opener from Munich’s Kingsley Coman, and Javi Martinez’s winner.

On Wednesday, Liverpool hosted Maribor at Anfield, having previously won the prior away fixture 7-nil, and won 3-nil courtesy of goals from Mohammed Salah, Emre Can and Daniel Sturridge; Manchester City travelled to Napoli for a very tricky return fixture against the Serie A leaders, having been a little fortunate to claim a 2-1 home victory in the prior game, but carried on their impressive form with a 4-2 victory, with their goals scored by Nikolas Otamendi, John Stones, Sergio Aguerro, and Raheem Sterling, after  trailing to an opening goal from Napoli’s Lorenzo Insigne, and conceding an equalising penalty from Jorginho to make it 2-all.

Spurs entertained Real Madrid in their return fixture having claimed a point in a 1-all draw in the first fixture a fortnight ago, and showed their improved comfort in performing at their Wembley home, with a convincing 3-1 victory over the thrice European Champions of the past 4 years, courtesy of a brace from Dele Alli, and a third from Christian Eriksen, before Ronaldo scored a consolation for Madrid.

With the current seeming underperformance in the group stages of both Madrid clubs, Bayern Munich and Barcelona, the English clubs appear quite strong, though whether they can return to their dominance of the latter stages of the competition as occurred around 10 years ago, remains to be seen. Another intriguing issue may be the draw for the knock out stages where, if current trends continue, it’s possible that most, if not all of the EPL clubs are in the winners group one with PSG, but that the 2 Spanish giants and Munich are in group of runners-up, increasing their likelihood of meeting one of them in the round of 16.

Arsenal moved into the Europe group last 16 with an away nil-all draw with Red star Belgrade after resting several first team regulars in preparation for Sunday’s visit to the Etihad Stadium to face Manchester City, whilst Everton bowed out of the competition after suffering a 3-nil defeat at Lyon, their fifth consecutive defeat, before they also return to EPL competition on Sunday against Watford.

The EPL teams are still split on the issue of division of overseas rights when the next package is agreed, with the big 6, and 3 supporting sides looking for the new split to be based on league position, with the remaining eleven clubs insisting that the rights be split equally between all participating teams. It’s thought that the value of domestic rights may fall given that only current TV providers, Sky and BT, are deemed the only likely bidders as Amazon’s interest has cooled given their need to focus on their acquisition of the Whole Foods business, whilst overseas rights are expected to increase in value by up to 40 percent in the upcoming set of negotiations.

Jose Mourinho was in Madrid on Friday to face tax evasion charges related to image rights relating to his time at Real Madrid 5 years ago, a charge that he strenuously denies. The hearing only lasted for several minutes with Mourinho claiming to have previously settled an agreed sum with the Spanish authorities, Lionel Messi, Cristiano Ronaldo, and

Javier Macherano have previously faced similar hearings before agreeing sums to be paid to the Spanish authorities.

The Premier League takes a break next weekend due to the international break with England playing high profile friendlies against Germany and Brazil, hoping that some of the gloss from the performances from the past year’s Under 17’s, Under 19’s, Under 20’s and Under 21’s carries into the senior team, particularly the Under 17’s World Cup win last week in their final against Spain.

Allan Jackson has been involved in soccer for more than 40 years as a player, referee, administrator and freelance writer