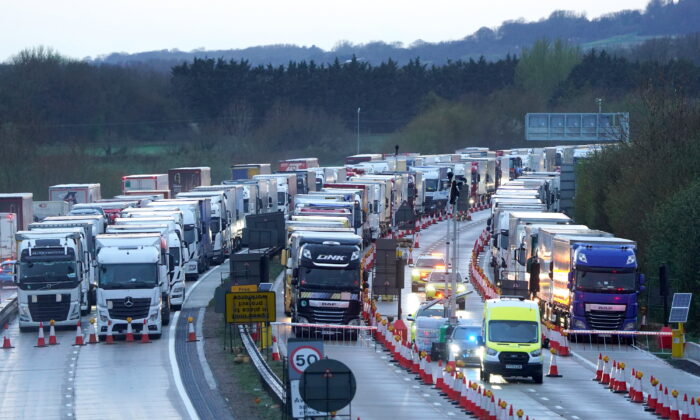 Delays at Channel crossings from the south of England have again brought traffic to a standstill on major routes in Kent.

A 23-mile coastbound stretch of the M20 was closed from junction eight (Maidstone) to junction 11 (Westenhanger) to store thousands of lorries heading for the Port of Dover or Eurotunnel as part of Operation Brock.

This is causing chaos on surrounding local roads.

The A20 Roundhill Tunnel is closed under the Dover TAP scheme to prevent HGVs jumping the queue.

Delays to Channel crossings are being driven by the suspension of P&O Ferries sailings after the operator sacked nearly 800 seafarers without notice last month.

This is putting more strain on other ferry operators amid increased demand as many families travel overseas for Easter holidays.

DFDS said P&O Ferries customers will be unable to transfer their bookings onto its Dover-Calais sailings between Friday and Sunday because of a lack of capacity.

Operation Brock involves using a moveable barrier to create a contraflow system enabling lorries to queue and other traffic to keep moving in both directions.

However, the system has been overwhelmed, with Kent hit by long queues every day since Friday.

The Port of Dover urged passengers to “allow plenty of time for their journey”.

It said in a statement: “Last weekend, port staff together with ferry operators and Kent partners worked tirelessly to move traffic as effectively as possible.

“We served 30,000 departing passengers, triple that of the corresponding weekend in 2021.

“Tourist vehicles moved continuously through the port, with no queuing outside the port.

“Unfortunately, the commencement of the busy Easter getaway period coincided with the ongoing impact of reduced ferry services and bad weather that affected remaining operators earlier in the week, causing one vessel to be taken out of service for a couple of days. This caused some delays, notably for freight.

“The remaining ferry operators are now back to their full complement of ships and the Port of Dover will be working with our operators and Kent partners, including the local resilience forum, National Highways and Kent Police to ensure passenger journeys are as smooth as possible.”

Ashford MP Damien Green called for changes to be made to Operation Brock.

He told KentOnline: “What we need is to make Brock work.

“We have established that up until now it does work, even in times of stress because the motorway is kept open.

“Once you close the motorway it makes it impossible, so the Kent Resilience Forum needs to look at what changes need to happen so Brock can cope with what is a very unusual situation, where more than half of the freight-carrying capacity at Dover has disappeared in one time.”

P&O Ferries announced on Wednesday that it is preparing to resume cross-Channel sailings.

A spokesman said: “P&O is looking forward to welcoming back vital services and we expect to have two of our vessels ready to sail on the Dover-Calais route by next week, subject to regulatory sign-off, namely both the Pride of Kent and Spirit of Britain between Dover-Calais.”