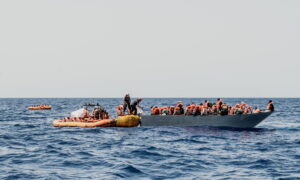 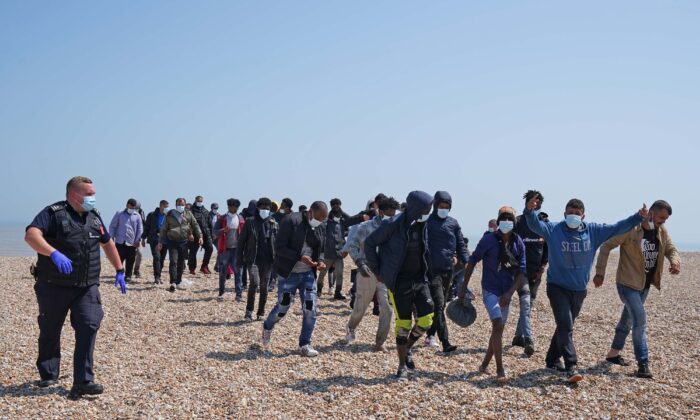 A group of people thought to be migrants are escorted by Border Force officers following a small boat incident in the Channel, from the beach in Dungeness, Kent, Britain, on July 20, 2021. (Gareth Fuller/PA)
UK

People continued to risk making the perilous journey across the English Channel to the UK on Tuesday, with numbers for 2021 now approaching the entire figure for 2020.

More than 8,000 migrants have succeeded in making the dangerous trip so far this year, according to data analysis by the PA news agency.

Men, women, and children, many of whom have fled violence, torture, and persecution, regularly set off from France packed on board unseaworthy dinghies, often after paying people smugglers.

On Monday, at least 430 people, including women and young children, made the journey, a new record for a single day.

High numbers of migrants continue to risk their lives in their bid to cross the 21-mile Dover Strait, despite Home Secretary Priti Patel’s vow to make the route “unviable.”

More people reached Britain on Tuesday, with multiple beach landings at Dungeness, and others arriving at Dover, further along the coast.

Numbers of crossings have shot up in recent years, with last year’s total more than quadrupling the number of arrivals in 2019.

Despite this, the UK continues to see far fewer boat arrivals and asylum claims than many of its European counterparts.

At least 44,230 people have arrived in Europe via the Mediterranean by land and sea so far this year, according to data from the United Nations High Commissioner for Refugees (UNHCR).

Also, despite the sharp rise in small boat arrivals on the south coast, asylum applications in the UK fell in 2020 to 29,456.

This was significantly lower than the 93,475 asylum applications made in France and the 121,955 made in Germany.

In October, a Kurdish-Iranian family, including small children, died when their migrant boat sank off the French coast.

Speaking on Times Radio, immigration minister Chris Philp said Monday was the “worst day ever” for crossings and it is “vital” that action is taken.

He said Patel is close to reaching an “enhanced agreement” with French authorities to boost cooperation and increase police patrols on French beaches.

Philp also pledged that the controversial Nationality and Borders Bill currently going through Parliament “closes some loopholes” and will reform the asylum system.

However, a coalition of campaigners called Together With Refugees has said the Bill is inhumane and unworkable.