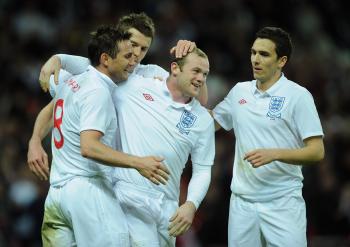 ROAD TO WORLD CUP: Wayne Rooney celebrates with his team mates after he scored during the International Friendly match between England and Slovakia at Wembley Stadium on March 28 (Shaun Botterill/Getty Images)
Soccer

England’s emphatic journey to the World Cup finals in South Africa was a pleasure to behold. Winning 9 out of 10 games and scoring 34 goals, they stand as the highest scoring team in 2010 World Cup qualifying.

In particular, the thorough dismantling of Croatia banished memories of England’s failure to qualify for Euro2008. Manager Fabio Capello’s legendary discipline brought a sharp focus to England’s game, and perennial problems such as the “Lampard/Gerrard conundrum” were brushed aside as England developed and sustained a fast, expansive, and fluid approach. The rest of the world looked on anxiously.

However, the course of true love rarely runs smoothly, and after the euphoric qualifying campaign, the following six months brought back nagging concerns.

Injuries to key players became, once more, endemic. And John Terry’s affair with Wayne Bridge’s former partner not only disgraced the national team, but deprived England of a player in a key position. Now there are rumours of disquiet in Gerrard's marriage. However, his wife denies any open rifts with her husband who is, as usual, stoic and professional in his Liverpool work.

With about a month to go though until first game against the United States on June 12, a fresh optimism is breezing through the nation. After the friendly game against Japan on 30 May,  Capello will announce his final 23-man squad.

Wayne Rooney’s world-beating form seems matched by his body’s ability to recover from hard knocks. Even his groin injury sustained in United's last game of the season appears to be a minor setback.

Rio Ferdinand, Ashley Cole, and Aaron Lennon have all recently made appearances for their club sides after lengthy absences through injury.

As the tournament draws near, we are bombarded with comment and opinion from players and managers, past and present, who have raised the illustrious trophy. Amidst all the debate, one theme appears constant—the need for good team spirit throughout the squad.

This is one striking feature of Capello’s regime, his iron discipline successfully containing England’s sometimes larger than life assembly. With “WAGS” (wives and girlfriends) banished to the occasional postmatch rendezvous, and mobile phones banned in camp, there is a palpable sense that England’s oft wayward stars will be brought to heel and focus on the job at hand.

Many factors point to England’s success. A favourable draw pits them initially against Slovenia, Algeria, and the U.S. With 60,000 travelling fans they will be the most supported team outside the host nation.

South Africa’s winter climate will not be too much of a harsh adjustment. Although Spain and Brazil remain favourites, most teams will fear an England firing on all cylinders, and there is a sense that on their day Capello’s England can sweep past anyone.

Old concerns have not been completely vanquished though, and player fitness is essential. There is again much talk of the brutal nature of the domestic schedule, and players recovering from lengthy absences can scarcely be compared to the freshness of those who have completed less intensive seasons oversees.

No English team in the Champions League semis has perhaps been a blessing. The fitness of Wayne Rooney will be paramount.

Essential midfield holding player Gareth Barry may miss the competition due to injury sustained in the Man City–Spurs clash for the last European Champions League place, which City lost.

So, many questions remain. Will England’s fast-flying wingers, accomplished defense and dynamic midfield re-ignite the passion and vision of 1966?

Will Duran Duran really re-record Rio with the England captain on guest vocals if England raise the hallowed Jules Rimet trophy on July 11?

And most crucially—will Peter Crouch dance “the robot” if he scores?