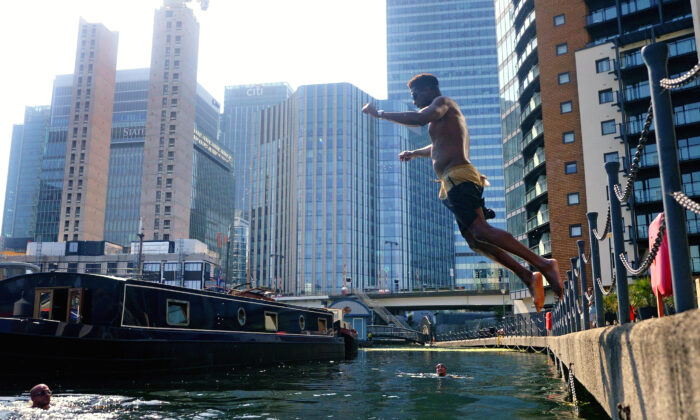 A swimmer dives into water in the Canary Wharf docklands in east London on July 19, 2022. (Victoria Jones/PA Media)
UK

Cambridge, which holds the previous record of 38.7C, recorded in July 2019, saw the mercury rising to 39.9 on Tuesday.

The temperature needs to be verified before the record can be confirmed.

The Met Office holds temperature records for the past 150 years, dating back to the late 1860s, although there are variations in when different areas started keeping records, and records in earlier years would be less frequent than those from recent decades.

All trains between London Euston and Milton Keynes have been suspended as emergency services deal with a lineside fire.

The blaze was caused when 25,000 volt overhead electric cables came down in Harrow.

Network Rail said all services to and from London Euston are suspended until further notice.

London Fire Brigade declared a “major incident,” saying there had been “several significant fires across the capital.”

The UK Health Security Agency has issued a level 4 heat-health alert for all regions of England for the first time since the system was introduced in 2004. The Met Office has also issued the UK’s first red extreme heat warning, covering much of England, Wales, and southern Scotland. Both are running from Monday to Wednesday.

Met Office Chief Meteorologist Neil Armstrong also said there seemed to be an “increasing risk of thunderstorms” particularly in the Northeast of England on Tuesday and in the south on Wednesday.

The Met Office has issued a yellow thunderstorm warning for parts of southeast England for Wednesday.

The weather service also blamed the hot weather on global warming and suggested it “can be attributed to human activity.”

The record-breaking temperature in recent days has also emboldened the climate activist group Extinction Rebellion, with two members smashing the glass wall at the building entrance of News UK, which owns The Sun, the Times of London, and The Sunday Times.

Four others sprayed “tell the truth” and “40 degrees = DEATH” on the front of the building and pasted recent copies of The Sun headlines about the heatwave onto windows.

One activist said that they were protesting that News UK publications were printing stories of “people happy in the sun,” “women in bikinis,” and “happy toddlers with ice creams.”

The Metropolitan Police said five people were arrested on suspicion of criminal damage.

Owen Evans and PA Media contributed to this report.