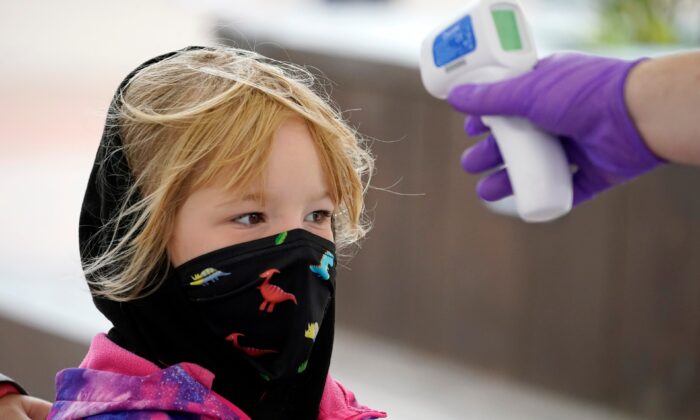 A child wears a mask as she has her temperature checked at the entrance to Alton Towers in Alton, England, on July 4, 2020. (Christopher Furlong/Getty Images)
UK

England’s test-and-trace system has “failed” to deliver on its main objectives despite its “eye-watering” multi-billion-pound budget, a UK Parliamentary committee has said.

In a damning report published on Wednesday, the Public Accounts Committee of the House of Commons said the mass testing scheme “has not achieved its main objective to help break chains of COVID-19 transmission and enable people to return towards a more normal way of life” despite being handed an “eye-watering” budget of £37 billion ($51 billion) over two years.

The scheme, known officially as the NHS Test and Trace Service (NHST&T), has been one of the most expensive health programmes delivered in the pandemic, costing nearly 20 percent of the entire 2020–21 budget of the National Health Service (NHS) in England.

But the committee said its “outcomes have been muddled and a number of its professed aims have been overstated or not achieved.”

The system has “failed to deliver on its central promise of averting another lockdown,” said the report. Instead, since October 2020 “the country has had two more national lockdowns and case numbers have risen dramatically.”

Committee chair Dame Meg Hillier, a Labour MP, said the scheme has “failed” to achieve its ambitions “despite the vast sums thrown at it.”

“For this huge amount of money we need to see a legacy system ready to deliver when needed but it’s just not clear what there will be to show in the long term,” she said.

The committee said that only 14 percent of 691 million lateral flow tests sent out had results reported, and “it is not clear what benefit the remaining 595 million tests have secured.”

The report is also critical of the scheme’s use of thousands of consultants who are paid an average of £1,100 ($1,510) per day. “The continued reliance on the over-priced consultants who ‘delivered’ this state of affairs will by itself cost the taxpayer hundreds of millions of pounds,” the committee said.

In response to the report, a government spokesperson said: “We have built a testing network from scratch that can process millions of tests a day—more than any European country—providing a free LFD or PCR test to anybody who needs one.”

“The new UK Health Security Agency will consolidate the knowledge that now exists across our health system to help us tackle future pandemics and threats,” said the spokesperson.

Professor Sir Andrew Pollard, the director of the Oxford Vaccine Group, said on Tuesday that the UK’s high number of CCP (Chinese Communist Party) virus cases—which have been averaging more than 40,000 a day—is “very much related to the amount of testing.”

He said the “very effective testing in schools” is picking up “a lot of very mild infections” among children, which in some parts of the country account for “the vast majority” of the positive cases.