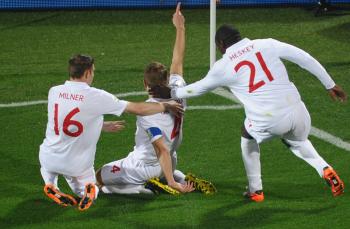 As the teams lined up in the tunnel before the game one man looked strangely out of place. Whilst all around him loosened their limbs and gently warmed up for the match ahead, England goalkeeper Robert Green stood absolutely rigid, his face contorted in concentration. He looked absolutely terrified.

After the game, his terrible blunder having let USA back into the match, he cut a figure so tragically forlorn even Jim Carrey would have trouble matching it.

Before the contest, England manager Fabio Capello had made much of the new found “English spirit.” That will now be put sorely to the test.

Although all the players said the right things after the game, in reality they are professional footballers in South Africa who are there to win the World Cup, not to console a broken man.

After the 1–1 draw, ex-captain John Terry spoke of the squad being “in each others pockets.” It was only a small slip, but Capello’s previous efforts to forge a unified team spirit seem to have failed, with, at a minimum, Robert Green being horrendously ill-equipped to deal with the pressure of the big occasion.

Team spirit is not something you can force. Iron discipline is not enough. Perhaps Capello has not really managed to harmonize the disparate egos and huge weight of expectation that comprise this England squad.

Of course, it is easy to point to injuries. The loss of captain Rio Ferdinand was a major blow. But Germany too lost their captain, Michael Ballack, not long before the tournament, and it didn’t stop them from demolishing Australia 4–0 in their opening game.

Others have simply said of Capello: “Welcome to the England job,” as if some pre-ordained fate leads England to fail miserably just when it matters most.

At the least, the England coach will be delighted to see the return of holding player Gareth Barry to the midfield for Friday’s game against Algeria. This will allow captain Steven Gerrard to move out to the left flank where first James Milner and later Shaun Wright-Phillips were so ineffective against the USA.

Central defense may be more of a problem, where Jamie Carragher’s lack of pace was ruthlessly exposed and possible replacements Matt Upson and Michael Dawson are both inexperienced at this level. Capello broke his own golden rule by including the injury prone Ledley King in his squad, and was immediately punished for it.

There were undoubtedly positives to be taken from the opening game; Gerrard’s goal was sublime, generally the team maintained a decent shape, and the two fullbacks Ashley Cole and Glen Johnson provided width and inventiveness in attack.

Whether or not this will be enough for England to really pick themselves up after Saturday’s disappointment and push once more for the semifinals remains to be seen. Rooney in particular is capable of self-destruction, and in a worse case scenario sustained frustration could see the England talisman once more sent off as his temper boils over…

Should England fail to once more meet expectations, blame will land squarely on the shoulders of Fabio Capello, who at £6 million a year has not come cheap. The England manager’s position is notoriously difficult, weighing the immensities of a passionate nation’s expectations with the reality of many years of little success.

In particular, who is capable really of gelling together these hugely celebrated players from various Premier League clubs and truly convincing them they are a world-beating national side?

The FA may yet rue their lack of courage in overlooking one Jose Mourinho when he was available back in January 2008.