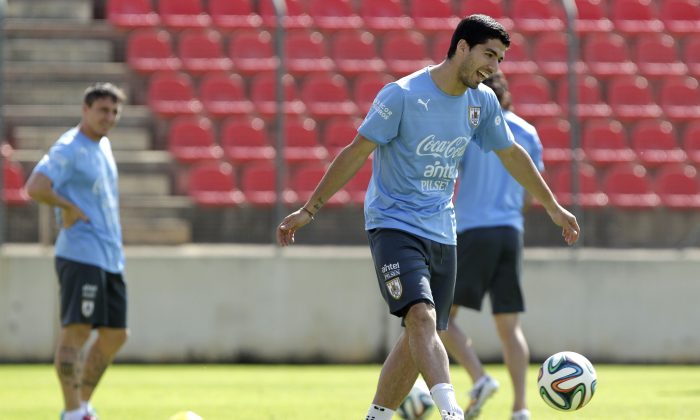 An article saying that the referee in the England-Uruguay World Cup match has been charged with match fixing is fake.

When one shares the post, it has an official BBC.com-looking URL and uses the “BBC NEWS” image. “BREAKING NEWS – England are to be given a second chance replay against Uruguay as it emerges the referee in charge of tonight’s fixture is charged with match fixing offences and bribery,” it reads.

However, when one clicks on the post, they’re taken to a page that says. “WE ARE SORRY, BUT YOU WERE TRICKED! IT WAS JUST A JOKE!!!”

The Uruguay-England hoax had more than 4.5 million views, according to the Sunday Times Daily website.

The same website had a fake post that said Uruguay star Luis Suarez was being investigated for doping. That’s also not true.

THE ASSOCIATED PRESS UPDATE: ‘In or out’: Italy and Uruguay battle to advance

Mario Balotelli and Italy are struggling to recover after a draining loss to Costa Rica.

Two teams in completely different states — both mentally and physically — meet Tuesday and only one of them will advance to the second round of the World Cup.

“I’m enjoying this moment,” Suarez said after scoring both goals in the 2-1 win over England.

However, Italy holds the edge in terms of result options due to a better goal difference.

If the Azzurri win or draw they go through, while Uruguay must win to reach the last 16.

Costa Rica has already advanced and leads Group D with six points from two games. Italy and Uruguay have three points each and England has already been eliminated with zero points.

“We have only one necessity now,” Italy coach Cesare Prandelli said. “We must regain our energy. … With this match either you’re in or you’re out and I’m hoping to see an Italy with a different approach.”

That was why Prandelli put an emphasis on sprinting in training Sunday, instructing his players to rush into the area at full speed before attempting shots on goal.

The match at the Arena das Dunas — named after this coastal city’s massive sand dunes — will start at 1 p.m. local time (noon EDT/1600 GMT), meaning that heat could be an issue again.

Prandelli is also tinkering with potential formation and lineup changes. He faces widespread calls to insert Ciro Immobile alongside Mario Balotelli in attack.

Immobile led Serie A with 22 goals — none of them penalties — for Torino before signing with Borussia Dortmund just days before departing for Brazil. But his only appearance so far in this tournament was in the final 17 minutes of the 2-1 win over England.

And with defensive midfielder Daniele De Rossi almost surely ruled out due to an injured calf muscle, Prandelli will probably revert from a four-man defense to the three-man formation employed by three-time Serie A champion Juventus. Giorgio Chiellini, Leonardo Bonucci and Andrea Barzagli — who all play for the Turin club — would fill those places.

Paris Saint-Germain midfielder Marco Verratti is set to return in midfield for Italy and left wing back Mattia De Sciglio is ready to play after missing the opening two matches due to an injured thigh muscle.

Uruguay is a familiar opponent for Italy. The Azzurri beat the South American side in a penalty shootout in the third-place match of last year’s Confederations Cup. Italy goalkeeper Gianluigi Buffon stopped three penalties in the shootout, which followed an entertaining 2-2 draw in which Edinson Cavani scored both goals for Uruguay.

Italy is just as familiar for Uruguay, though.

Wing back Martin Caceres plays for Juventus, midfielder Walter Gargano is with Parma, left back Alvaro Pereira is owned by Inter Milan and Cavani spent seven seasons in Serie A before joining PSG a year ago.

“I don’t expect Italy to put 10 men behind the ball, as that is not their style,” Caceres said. “And that suits us, because Suarez and Cavani become deadly with a little space. We’ll play on the counter attack.

“Italy’s loss to Costa Rica surprised us,” Caceres added. “It would have been better for us if the Azzurri had won. That way a draw would be enough for both teams.”