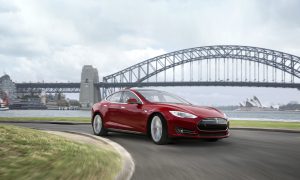 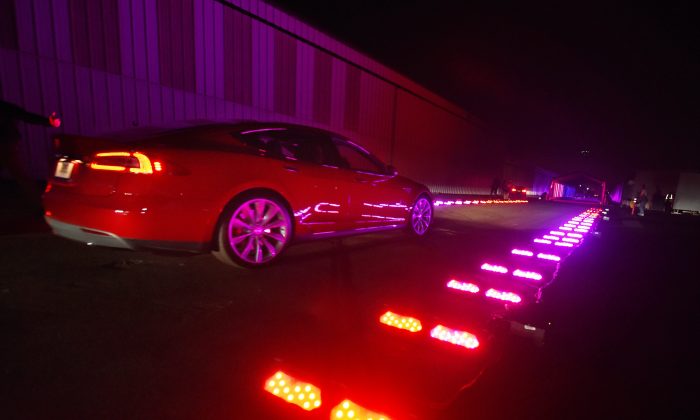 Drivers test the new Tesla 'D' model, the faster, all-wheel-drive version of the Model S electric sedan, at the Hawthorne Airport in Los Angeles on October 9, 2014. If England's tests work, electric cars like this Tesla won't need to spend as much time at the charging station. Mark Ralston/AFP/Getty Images)
Special

Apart from the higher prices, one of the major drawbacks of electric cars is their limited range. A fully-charged Tesla S sedan can only drive for 270 miles, compared to 540 miles for a Prius with its filled tank.

Automakers are gradually curbing that problem by adding more batteries to their electric models, but some companies are pursuing an alternate path.

In July, Qualcomm launched a partnership with the car parts maker Brusa to manufacture metal plates that can enable electric cars to recharge while on the road.

Now the technology has received the backing of national governments. Highway England, the British state-owned company that manages the country’s roads, will begin a test-run of “electric highways” later this year, and plans to invest nearly $800 million in the technology over the next five years.

Wireless charging works by using conductive coils to create a magnetic field that can transfer electricity in lieu of a metal charger, and has been applied to a wide range of uses, including charging phones.

The project was given the green light last week after the completion of a feasibility study. More details about the project will be released after Highway England finds a contractor for the project.

The experiment, to be conducted on private roads, will install wireless technology onto the vehicles and install testing equipment underneath the road to emulate motor conditions, and will last approximately 18 months.

“Vehicle technologies are advancing at an ever increasing pace and we’re committed to supporting the growth of ultra-low emissions vehicles on our England’s motorways and major A roads,” Highway England chief engineer Mike Wilson said in a statement.

England isn’t the first country to experiment with electric roads. In 2013, South Korea installed the technology on a 7.5-mile route.

The one concern is that by the time the project is completed, car batteries will be so efficient that wireless charging roads might be obsolete.

The U.K. project isn’t intended as a substitute for charging stations, but a complement. As a part of the government’s Road Investment Strategy, Highway England still wants to install charging stations every 20 miles of its highway network.

The one concern is that by the time the project is completed, car batteries will be so efficient that wireless charging roads might be obsolete.

“But it sounds very ambitious to me. Cost will be the biggest issue and I’m not totally convinced it’s worth it,” Paul Nieuwenhuis, the direct of the Cardiff Business School’s Electric Vehicle Centre of Excellence, told the BBC.

As little as five years ago, the Tesla Model S only had a range of 160 miles. In 2016, the Tesla Model 3 is expected to have a range of 250 miles, and the 2016 Toyota Mirai was recently rated by the Environmental Protection Agency as having a 312-mile range.

The project is part of Britain’s efforts to reduce carbon emissions. Britain is aiming for an 80 percent reduction by 2050.