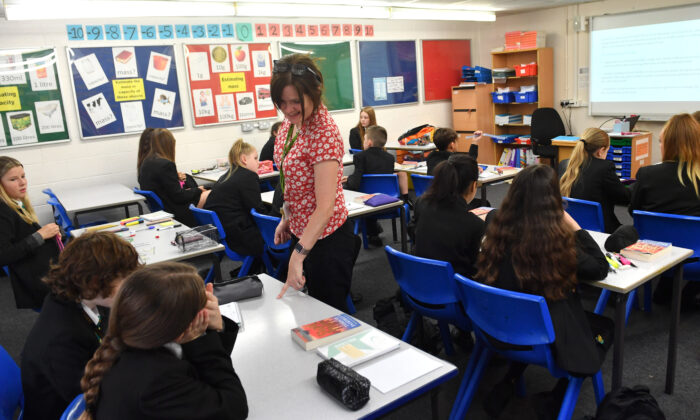 A teacher speaks to the class at Copley Academy in Stalybridge, England, on Sept. 9, 2021. (Anthony Devlin/Getty Images)
UK

New regulations will allow qualified teachers from any country to work in schools in England, the UK government has announced.

Currently, the English education system only recognises teachers from a list of 39 designated countries, including European Economic Area (EEA) countries, the United States, and Australia.

But under plans announced on June 10, from 2023, qualified teachers from any country will be able to work in schools in England if they have at least one year’s experience in the classroom.

The Department for Education (DfE) said it wants “the best teachers from across the world” to be supported to work in schools in England as part of the government’s commitment to “ensure every pupil is taught by an excellent teacher.”

Schools minister Robin Walker said: “I want this country to be the most attractive place in the world to be a teacher—that means world class training, high standards, and crucially, opportunity.”

“The expertise we draw upon shouldn’t be limited by geographical location,” he stressed.

“That’s why our plans to make it simpler for high quality teachers from all over the world to teach in our classrooms are so important, and why I am excited to welcome the best international teachers to our schools, ultimately to make sure each and every young person has the education and opportunities they deserve.”

Under this “fairer and easier” new system, foreign teachers wanting to teach in English schools will need to meet a new set of consistent standards, rather than their eligibility being dictated by the country they qualified in, said the DfE.

The government said it will introduce new standards including the need to have completed teacher training of at least the same academic standard as that in England and a requirement to demonstrate a proficient level of English.

Headteachers have welcomed the move but said it is a sign of the “very severe teacher shortages being experienced by schools and colleges.”

Julie McCulloch, policy director at the Association of School and College Leaders, said: “The government repeatedly misses its own initial teacher training targets and far too many teachers are then leaving the profession early in their careers.”

She said that this left schools struggling to fill vacancies and that this “particularly affects those which face the greatest challenges.”

She added that teaching is a “fantastic job but it is not surprising that we are struggling to recruit and retain staff when they are worn-down and underpaid.”