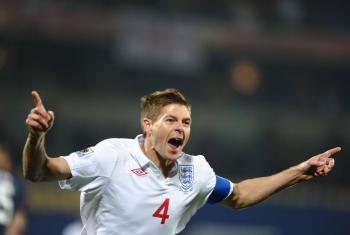 DOWNHILL FROM HERE: England's weaknesses came to the fore after captain Steven Gerrard put them ahead early against the US. (JEWEL SAMAD/AFP/Getty Images)
Soccer

England’s Frailties on Display Against USA

A 1–1 draw in their opening game with the USA is far from ideal, yet they should still be able do enough against remaining Group C opponents Algeria and Slovenia to go though to the next round in first place.

They will be happy to see Gareth Barry return to the fold for Friday’s match against Algeria, allowing captain Steven Gerrard to push out on to the left where tonight Milner was a liability and his replacement against the US, Shaun Wright-Phillips, ineffectual.

England played with a great shape, which bodes well for the future. Both fullbacks impressed, with many of England’s best moves coming through either Ashley Cole on the left or Glen Johnson on the right.

Heskey, too, was effective upfront, setting up Gerrard’s goal.

And the opening goal was world class, a deft touch from Heskey and a fantastic finish from Gerrard setting English hearts alight after only four minutes.

But it was not to be England’s night. Although the USA played with precision and commitment, occasionally looking dangerous from set pieces, they had not really threatened until an innocuous long-range effort from Fulham’s Clint Dempsey was mishandled horrendously by the England keeper. Green will take a long time to forget this blunder that allowed the Americans to equalize.

Rarely has a world beating side emerged without a solid and dependable keeper. England have struggled with this position for quite some time now, and the uncertainty has an unsettling effect on the defense and the team as a whole.

Also disturbing for manager Fabio Capello will be the ease with which USA striker Jozy Altidore skipped past Jamie Carragher in the second half, only to see his shot pushed on to the post by a relieved Green.

Rio Ferdinand’s injury, and Ledley King’s inability to endure sustained play, could yet prove costly for England in defense.

Perhaps most disappointing for England was Aaron Lennon on the right wing. Although his pace and skill allow him to regularly get into promising positions, he lacks the stature and decisiveness to really make it count. Beckham will have watched anxiously from the dug out.

With a full team and just that little bit of luck, England could really have challenged for this World Cup. A few injuries to key players has exposed underlying frailties, and in particular, a lack of strength in depth.

After this performance, it has become even harder to imagine them conquering either Spain or Brazil.