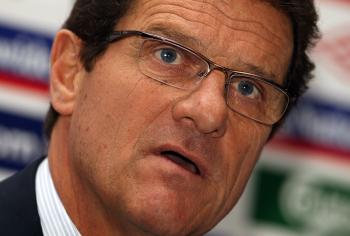 England Coach Fabio Capello has selected his first 30 players for the South Africa 2010 World Cup squad. This will be narrowed down to 23 players by June 1st.

The 30-man squad will be involved in England’s pre-tournament training camp, as they take on Mexico at Wembley on May 24, and Japan in Austria on May 30.

Surprise additions to the squad have been uncapped pair Adam Johnson and Michael Dawson, alongside Dawson’s Tottenham teammate Tom Huddlestone.

Perhaps Capello’s greatest coup is coaxing Jamie Carragher out of international retirement. The Liverpool defender spoke of his desire to play once more at the highest level, adding that he is keen to work under Fabio Capello. Speaking at a press conference, however, the England boss admitted that he had not been so successful with Paul Scholes.

Speculation that Gareth Barry’s recent injury would exclude him from the squad proved to be unfounded. An integral part of England’s qualifying campaign, he should be fit in time for the World Cup opener, although training until then will be limited.

Ledley King’s inclusion reflects his recent completion of three Tottenham matches in 10 days. Despite recurrent knee problems requiring specialist training routines, his quality was never in doubt, and Capello made a point of mentioning his importance.

Scott Parker has earns a place after a break of seven years from international soccerl. He has been West Ham's star player of the season and was a big factor in them surviving the drop.

Capello explained that Bobby Zamora ruled himself out through injury. He is currently able to play only by taking injections before each match. But it was joked that two goals for Fulham in Wednesday’s Europa League final against Atletico Madrid may be enough to grant Zamora a recall.

With many key players recovering from injury, including captain Rio Ferdinand, England coach Fabio Capello has made a careful and balanced selection of youth and experience.

England’s first World Cup contest is against the United States in Rustenburg, South Africa, on June 12.