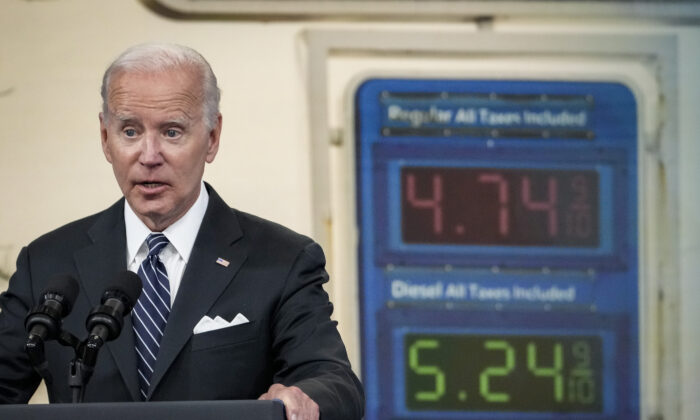 They joined a chorus of critical voices on both sides of the aisle after the president asked Congress to suspend that federal tax on June 22.

“It is a silly idea, which violates simple, basic economics,” said John Cochrane, Rose-Marie and Jack Anderson Senior Fellow at the Hoover Institution, in a June 23 email interview with The Epoch Times.

“It is a sign of an administration in disarray that all they can come up with is this patently bad idea, in an effort to pander to voters,” he added.

“In my opinion, that is a very bad move,” said Richard Welch of the Oil and Gas Workers Association in a June 23 interview with The Epoch Times.

“It is not going to help the supply issues,” he continued.

Tim Stewart, president of the US Oil and Gas Association, struck a slightly more optimistic note in a June 23 email interview with The Epoch Times.

He argued that potential savings to consumers, however minor, mean that “we shouldn’t just dismiss this idea out of hand.”

“A tax holiday might provide some short-term relief, but the problem is just that: it is short term and is not guaranteed to have a lasting impact past the next 90 days,” he concluded.

“A gas tax holiday is a poor, short-term, pandering non-solution to the very real energy supply problems in the US and the world,” the energy industry executive told The Epoch Times in a June 23 email interview.

“We are short supply. Any real solution would be supply enabling like getting the government out of the way of domestic production. We don’t need subsidies or ‘help’, we simply need roadblocks removed,” he added.

“I don’t know any economist or policy expert who supports the idea on the merits,” said Jason Furman, an economics professor at Harvard University who served on President Barack Obama’s Council of Economic Advisors, in a June 23 email interview with The Epoch Times.

While campaigning for president in 2008, the last period of historically high gas prices, Obama famously described the idea of a gas tax holiday as a “gimmick.”

“It’s shifting burdens to a later date in the hope that nobody notices,” said Katie Tubbs, an energy researcher with the Heritage Foundation, in a June 23 interview with The Epoch Times.

“What’s more interesting about the whole gas tax holiday discussion is that President Biden even offered it up as a solution at all,” she added, citing widespread opposition among many in Biden’s own party.

Senate Minority Whip John Thune (R-D.D.) said on June 22 that any House bill based on the proposal would reach the Senate “dead on arrival,” as reported by Reuters.

Sen. Josh Hawley (R-Mo.) took to Twitter to scoff at the notion of a merely temporary gas tax holiday.

If Joe Biden was serious, he would make the gas tax “holiday” permanent and pay for it with tariffs on Chinese energy – solar panels, batteries, wind turbines

“Dropping the 18-cent federal gas tax will not make much difference to gas buyers. It will make a large negative difference for keeping our highways and bridges in good working condition,” said former Wisconsin state senator Frank Lasee, who worked in Wisconsin Governor Scott Walker’s administration.

Others have hailed the potential policy. Rep. Tom O’Halleran (D-Ariz.), who in February introduced legislation to suspend the federal gas tax or the remainder of 2022, voiced enthusiasm for the Biden administration proposal through a statement.

House Speaker Nancy Pelosi (D-Calif.) has not yet signaled support for the proposal. Nor has Senate Majority Leader Chuck Schumer (D-N.Y.).

In April, Pelosi described such a holiday as “good PR.”

“The gas tax holiday would generate only tiny benefits for consumers while providing a windfall of extra profits for the oil industry,” said Harvard’s Furman.

Hoover’s Cochrane made a similar point, noting that “the tax cut will go straight to producers’ pockets.”

“A temporary tax cut along with environmental policies that threaten to bankrupt oil and gas companies give them no incentive to make investments to produce more gas,” he added.

He asserted that it “helped out a little.”

“Being clearer about supporting production and refining would help a little bit more. But overall, there is not much they can do to bring down prices which are largely determined by global forces,” he added.

Yet Welch, of the Oil and Gas Workers Association, argued that the SPR release merely decreased crude oil supplies without addressing other administration policies he thinks have constricted supply.

“The only thing that did was make the price go up even more,” he said.

Although the Biden administration has called on oil and gas firms to rapidly step up refining, Welch argued that pressure on companies to lower emissions makes it difficult for them to roll back changes motivated by those concerns.

He cited earlier pushes for energy firms to refine more ethanol and other alternative fuels in place of conventional hydrocarbons.

“You can’t just turn around and put it back to where they’re trying to run natural gasoline. These things take time,” he said.

Welch specifically cited challenges with securing financing as a major impediment to additional oil production. Heritage’s Tubbs said she had heard the same from smaller companies throughout the industry.

“Why the [expletive] did it take so long to get going on this? Industry has been warning the administration that this crisis was brewing since last November.

“Now, a meeting has been held. That’s great, but hopefully they will take some action rather than just ignoring both the problem and those who can actually help fix it,” said Stewart, of US Oil and Gas Association.

A spokesman for Phillips 66, a participant in the meeting, told The Epoch Times that the company’s meeting with Granholm alongside other refiners was “a good start.”

“Phillips 66 stands ready to continue to engage and work toward solutions,” the spokesman added.

Granholm suggested the Biden administration could use the Defense Production Act to expand production capacity during a June 22 press briefing, describing it as “a tool” after noting they had employed it in an effort to increase domestic green tech manufacturing.

Hoover’s Cochrane expressed pessimism about the potential results of the administration’s stance on American energy.

The Epoch Times has reached out to the Department of Energy and the other reported participants in the June 23 meeting with Granholm: Shell, BP, Chevron, Valero, and Exxon Mobil.

Marathon Petroleum, another reported participant in the June 23 meeting, declined to comment to The Epoch Times.