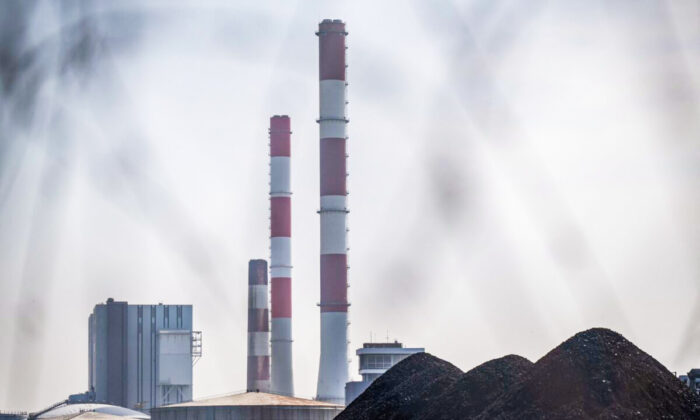 A coal pile in front of the chimneys of a coal plant in France on March 27, 2022. (Loic Venance/AFP via Getty Images)
Europe

France is considering restarting at least one of its coal plants following a warning issued by top power company executives amid energy shortages caused by European and U.S. sanctions against Russia.

“As a precautionary measure, given the situation in Ukraine, we are reserving the option to reactivate the Saint Avold plant … if needed this winter,” stated the French Ministry of Energy this week, referring to the Saint Avold coal power plant in Lorraine. The power plant was shut down just a few months ago in March.

The energy ministry said the decision would be carried out due to “the situation in Ukraine” and its effect on energy markets in France. No Russian-exported coal will be used in the Saint Avold station, the ministry also said Sunday.

The ministry said that its plans won’t affect France’s phasing out of coal power, claiming the Saint Avold operator would offset emissions via reforestation and other measures, according to RTL and AFP. It stressed that French President Emmanuel Macron is still seeking to eventually shut down all of the country’s coal-fired stations.

France’s announcement comes after top power company officials with Engie, EDF, and TotalEnergies warned that energy conservation efforts must be taken to deal with potential shortfalls.

“Acting this summer will allow us to be better prepared to tackle next winter and in particular to preserve our gas reserves,” they wrote in Le Figaro on June 25. “We therefore call for awareness and collective and individual action so that each of us–each consumer, each company–changes their behavior and immediately limits their consumption of energy, electricity, gas and petroleum products.”

“The effort must be immediate, collective, and massive,” they added, noting that “every gesture” toward the goal “counts.”

The majority of France’s electricity comes from nuclear power plants. France derives around 70 percent of its energy from nuclear plants, according to a recent update from the World Nuclear Association, due to a longstanding government policy.

“In February 2022, France announced plans to build six new reactors and to consider building a further eight” amid the war in Ukraine, according to the association. It noted that “France is the world’s largest net exporter of electricity due to its very low cost of generation, and gains over 3 billion [euros] per year from this.”

Officials in Germany, meanwhile, recently announced the country will have to increase its coal-burning capabilities to deal with the energy crisis. The move comes in response to European Union sanctions targeting Russian natural gas.

Economy Minister Robert Habeck announced last week that “to reduce gas consumption, less gas must be used to generate electricity” and that “coal-fired power plants will have to be used more instead.”

“Otherwise,” he warned, “it will be really tight in winter.”