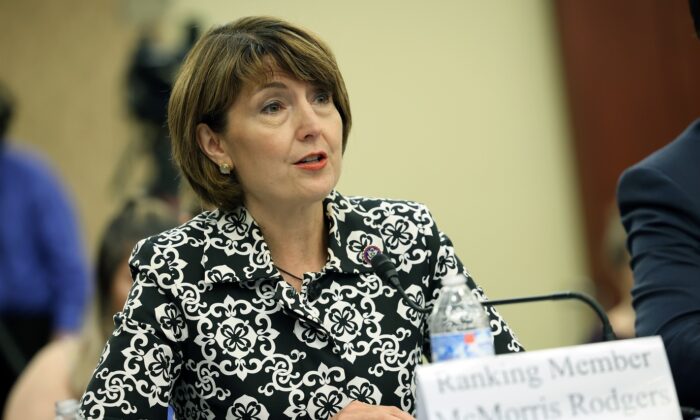 House Energy and Commerce Committee Republicans are demanding that the National Institutes of Health (NIH) investigate EcoHealth Alliance and its president after the organization allegedly withheld data relating to its research on COVID-19 during the grant renewal process.

According to its website, EcoHealth Alliance is a “global environmental health nonprofit organization dedicated to protecting wildlife and public health from the emergence of disease.”

However, the organization has been criticized by Republicans over information it provided in reports related to its experiments on mice at the Wuhan Institute of Virology in China, according to a letter Republicans sent to NIH Acting Director Lawrence Tabak on Monday.

U.S. intelligence officials said that the virus that causes COVID-19 may have come from the Wuhan lab, but other officials have argued it has a natural origin.

The letter was signed by Reps. Cathy McMorris Rodgers, (R-Wash.); Brett Guthrie, (R-Ky.); and Morgan Griffith, (R-Va.) and demanded an investigation into an alleged “cover-up and possible fraud related to research at the Wuhan lab.”

GOP lawmakers said they are calling for the investigations after a committee review of reports from EcoHealth found “pervasive discrepancies, inconsistencies, and omissions,” that “raise serious questions about scientific and ethical misconduct, violations of NIH policies and regulations, and possible false statements and fraud,” the Republicans wrote.

“Accordingly, we request the NIH investigate Dr. Peter Daszak” …  “and other EcoHealth officials to determine whether certain data related to mice deaths and other material information were intentionally withheld during the peer review process for EcoHealth’s grant renewal application,” they said.

Lawmakers stated that the grant in question was funded for June 2014 to May 2019 and that during this five-year period, EcoHealth was required to submit annual progress reports to the National Institute of Allergy and Infectious Diseases (NIAID).

“Such submissions typically occurred around mid-April and were required before funding for the following year was provided,” lawmakers said.

Around November 5, 2018, EcoHealth submitted a renewal application to NIAID, and the grant — for $3.7 million plus a $369,819 increase over the first award — was renewed for another five years some months after in May 2019, Republicans said.

That was before EcoHealth submitted its Year 5 progress report, they noted.

“EcoHealth first proposed testing chimeric SARS-like viruses in a humanized mice experiment to evaluate pathogenicity in the spring of 2016,” they continued. “The NIH approved this research in July 2016 with the condition that EcoHealth immediately stop its experiments and report to the NIH if there was more than one log of virus growth in any of mice groups infected with one of the chimeric viruses.”

They went on to state that EcoHealth “peculiarly” failed to specify in its proposal to NIH how pathogenicity would be evaluated in the experiment, and that NIH did ask for such information.

Lawmakers took aim at EcoHealth’s use of language in reports related to the mice experiment, stating that the 2018 grant renewal application concealed the deaths of the animals “in order to get money.”

EcoHealth reproduced “two figures from their Year 4 report but deleted the word ‘dead’ from the term ‘dead point,’ therefore not implying mice deaths,” they said.

“The renewal application’s use of the word ‘dead’ was defaced and deleted,” they further stated. “EcoHealth used ‘dead’ again in its Year 5 report.”

Republicans argue that there is no reason as to why the nonprofit organization would include the word “dead” in the Year 4 and Year 5 report graphs, but not in the graph in the renewal application, pointing to scientific and ethical concerns, and noting that peer reviewers were prevented from seeing results of the research that showed that “mice were dying at high rates from the chimeric viruses in a risky experiment.”

“EcoHealth found itself with unpleasant choices. It could admit that it was doing gain-of-function research, or risk losing money it desperately needed from NIAID, ” Republicans wrote in their letter, adding that “the presentation of the humanized mice data in the renewal application appears intentional.”

The NIH pulled funding for the EcoHealth grant in July 2020.

Lawmakers sent a letter to the National Academy of Medicine (NAM) in November 2021 requesting that it investigate Daszak for possibly violating the NAM member Code of Conduct and outlined a number of concerns while requesting an investigation into EcoHealth.

“After receiving our letter, NAM notified us they had opened an internal review of Daszak’s behavior, per our request,” they added. “We believe this letter about EcoHealth’s potential false statements and fraud is relevant to the ongoing investigation the NAM is conducting into Peter Daszak.”

The NIH also found EcoHealth Alliance was non-compliant with eight different portions of a written agreement it entered into with the U.S. government about funding it sent to the Wuhan lab, according to a letter sent in January that was made public by Republicans on the House Oversight Committee.

The Epoch Times has contacted EcoHealth Alliance for comment.