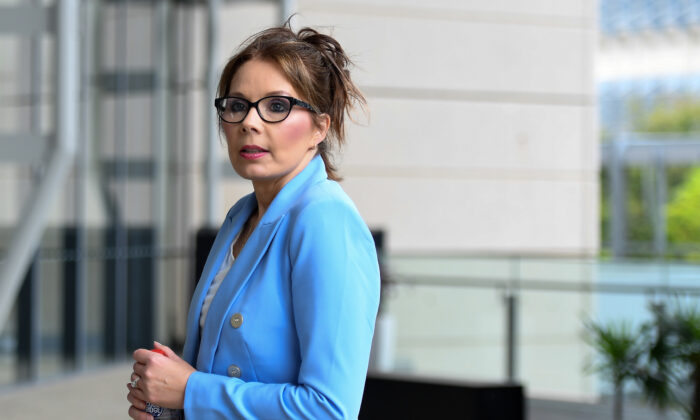 Nikki Jamieson, who lost her son to suicide, is seen speaking to the media during The Royal Commission into Defence and Veteran Suicide, in Brisbane, Australia, on Nov. 29, 2021. (AAP Image/Albert Perez)
Australia

When Nikki Jamieson saw her son, Daniel Garforth, go off to join the Australian Defence Forces in 2012, she did not expect it would set him on a course that would end with him dying by suicide.

However, in November 2014, the 21-year-old army private took his own life at Darwin’s Robertson Barracks. He left a suicide note which read: “The thing that’s finally pushed me over the edge is this job. Constantly being demoralised and ridiculed. I just couldn’t handle it anymore.”

Sitting with her son’s photo and slouch hat in front of her, the grieving mum told the Royal Commission into Defence and Veteran Suicide on Monday (pdf) that Garforth’s death was the result of “the endless torment of being bullied, belittled, ostracised and targeted by a certain member of his chain of command.”

“Several factors contributed to my son’s decline, including the mental health impact of not seeing his daughter … online relationship stresses that were reported through his online gaming activities; and feeling isolated from his family, friends and support networks,” she said during the hearing in Brisbane.

“However, these factors, in my opinion, would not have led to his death. These are factors he has dealt with many times previously.”

Jamieson described her son growing up as a “cheeky chap, very much the class clown,” but that was someone who was “loyal to the core,” a fact she noted had ultimately been his “Achilles heel”.

She said that Garforth reported the bullying to three different chains of command, one of which recorded his conversation and secretly took that conversation to another chain of command, from which he was later threatened with charges.

“These feelings of betrayal … spiralled his mental health further … heightened his feelings of guilt and shame at not being good enough,” Jamieson said.

“He reported he was in fear of going to work; he was fearful of being ridiculed and being considered a malingerer and a failure.”

She said her son was on the verge of crying on a number of occasions, his hygiene standards declined, he had withdrawn from his friends and colleagues, had anger outbursts, and at one point was described as “catatonic.”

Garforth, a father to a young girl, had applied for a discharge and hoped to come home for Christmas in 2014, but his application was cancelled.

“He was looking forward to leaving. Something happened that stopped that process… Which employer forces you to stay in the position that you don’t want to be in?” she added. “But Daniel felt trapped, and because he’s so loyal and committed to his work, he wanted to do the right thing.”

Jamieson said at no point did the Australian Defence Force (ADF) contact her as next of kin or any external organisations for help, and that it was not until four years later that she received a report on her son’s death, which was written in a defensive tone and was heavily redacted.

“Fundamentally, Daniel gave everything to the ADF and felt incredibly betrayed by his chain of command and abandoned by the ADF.”

“I don’t have a civilian process of natural justice, it’s not fair and equitable for me because I don’t have all the evidence there, so there’s a lack of transparency there.”

Jamieson, a suicidologist and PhD researcher in moral injury and veteran suicide, suggested that external or independent support mechanisms were crucial for struggling soldiers and that families needed to be informed of their loved ones’ mental health problems.

“We send our young, fit and healthy sons and daughters to serve Australia. They are returned to us in a coffin. This needs to change.”

“Dark Side” to the Military

The royal commission was established on July 8 in response to the high rate of defence and veteran suicide and will hold a 10-day public hearing this year focusing on people with lived experience, such as serving defence personnel, veterans, and bereaved family members.

According to the fourth annual report on suicide among ADF members, released in September by the Australian Institute of Health and Welfare (AIHW), there were 1,273 certified deaths by suicide among members between 2001 and 2019.

Sociologist James O’Connor told the commission turning the tribe on one of their own was a practice based on the belief that it improved “combat effectiveness.” But it had a devastating impact on the target.

“The desperate dark side of that is… this idea that you don’t rat on fellow soldiers, you don’t go jack,” O’Connor said. “What this means is most things stay in-house. It becomes impossible for the victim to speak out, and that leaves them in a deeply vulnerable space.”

Veteran and sociologist Ben Wadham said while there were many positives to living in such a strongly bonded community, “if you fall on the wrong side of it… this comes crashing down on you.”

Meanwhile, counsel assisting Peter Gray QC said that age-specific suicide rates for ex-serving males and females were “higher than the Australian population for all age groups under 50”.