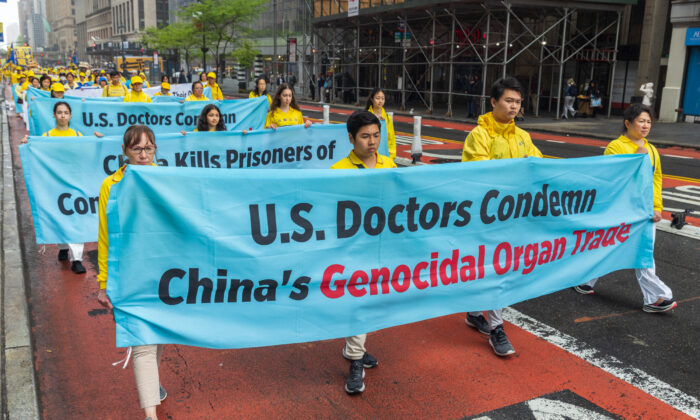 Falun Gong practitioners take part in a parade marking the 30th anniversary of the spiritual discipline's introduction to the public, in New York on May 13, 2022. (MarkZou/The Epoch Times)
Organ Harvesting in China

WASHINGTON—With rising awareness of the Chinese Communist Party (CCP) harvesting organs of prisoners of conscience, ending Western complicity would come next, said Dr. Jessica Russo, a board member of Doctors Against Forced Organ Harvesting (DAFOH), a medical professional advocacy group, and a clinical psychologist based in Philadelphia.

By “Western complicity,” she is referring to international transplant organizations turning a blind eye to or not holding the CCP accountable for forced organ harvesting, pharmaceutical companies in the West providing materials for China, Western transplant centers training Chinese physicians, and the media muffling the story.

“If we did not support China, they would not be able to do this,” Russo told The Epoch Times.

“We have to put a chokehold on this.”

An outstanding bill in Congress is trying to do some of that. The Stop Forced Organ Harvesting Act, introduced by Rep. Chris Smith (R-N.J.) in March 2021, stipulates property-blocking and visa-blocking sanctions on persons responsible for forced organ harvesting and prohibits exports of medical devices used in forced organ harvesting or related human trafficking.

The bill has 35 co-sponsors from 21 states, mainly Republicans, and is currently with the House judiciary and commerce committees. The bill must pass before Jan. 3, 2023, or it will have to be reintroduced in the next Congress.

The Chinese Communist Party (CCP) has been known for using the organs of executed and involuntarily prisoners for transplants, a practice that the regime announced as ending in December 2014.

However, a lesser-known yet more severe aspect of the operations that the CCP has never acknowledged is that it targets prisoners of conscience. “Killing on demand” was how Dr. Arthur Caplan, professor of bioethics at New York University, described the atrocity.

At a virtual event by the conservative think tank Hudson Institute on June 30, Russo and Nury Turkel, a senior fellow at the Hudson Institute, said that state-sanctioned forced organ harvesting still happens today in China.

‘A Third of the United States’

The two main groups targeted by the CCP’s “killing on demand” are Falun Gong practitioners and the Uyghurs in Xinjiang of northwestern China.

The spiritual discipline Falun Gong, whose teachings are based on the principles of truthfulness, compassion, and tolerance, reached 70 million to 100 million practitioners in the 1990s but came under nationwide persecution by the Chinese Communist Party in 1999. In the decades since, millions of adherents have been arrested and subjected to various forms of abuse designed to decimate their faith.

Russo pointed out that, adding the about 12 million Uyghur population in Xinjiang, the CCP’s total target population for forced organ harvesting is around 100 million.

“Just putting that in context, this is about a third of the U.S. [population],” she told The Epoch Times.

At the Hudson event, Turkel said that the persecution of Uyghurs in China had given rise to a new “marketing” message: Chinese hospitals had been advertising “halal organs”—organs from people who didn’t drink alcohol, eat pork, or do anything forbidden by Islam—to patients from Muslim countries. And the Uyghurs in Xinjiang of northwestern China are predominantly Muslims.

He added, “This is a human body that has been commercialized.”