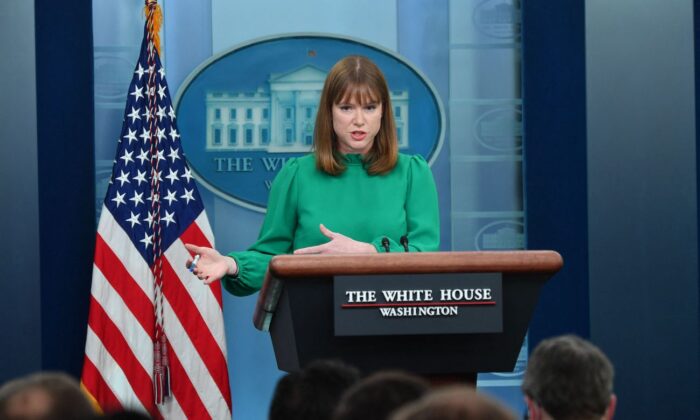 The White House was asked on Wednesday to comment on a report that said the Biden administration is expected to end a Trump-era immigration policy, known as Title 42.

The Title 42 policy implemented under the Trump administration in March 2020 enabled border agents to expel illegal immigrants back to Mexico immediately if they potentially pose a health risk amid the COVID-19 pandemic.

On Thursday, the Associated Press reported, citing anonymous sources, that the Biden administration, which has continued the policy, is expected to end it by May 23.

White House director of communications Kate Bedingfield was asked by a reporter whether the administration is “prepared to deal with the aftermath of ending Title 42 and the expected influx of migrants.”

Bedingfield did not confirm the AP report. She responded that the decision as to whether the administration would end Title 42 is “not an immigration or migration enforcement measure” but a “public health directive.”

“So the decision on when to lift Title 42 we defer to the [Centers for Disease Control and Prevention (CDC)],” she said.

The CDC is currently weighing up whether or not it will end Title 42 policy, and has until March 30 to complete its review.

‘Influx of People to the Border’

She continued, “That being said, of course we are planning for multiple contingencies, and we have every expectation that when the CDC ultimately decides it’s appropriate to lift Title 42, there will be an influx of people to the border.”

Bedingfield said the administration is “doing a lot of work to plan for the contingency.” She noted that on Tuesday the Department of Homeland Security held a briefing to review the plans it has to prepare for a potential spike in illegal immigrants at the border.

“So you heard from them yesterday on some of the planning that they’re doing more broadly—now, not specifically tied to Title 42 or an ultimate decision to lift it, but just more broadly to the work that they’re doing to continue to build up our migration system and ensure that we are restoring order at the border.”

DHS officials told reporters on Tuesday of contingency plans which include a scenario in which up to 18,000 border crossings could be seen per day. Currently, Border Patrol is seeing about 7,100 illegal immigrants a day.

“We need to be prepared for what we’re considering a potential contingency, which is that the lifting of Title 42 could increase flows,” a senior DHS official told reporters during the background briefing, multiple outlets reported.

The DHS on Wednesday released a fact sheet titled “DHS Preparations for a Potential Increase in Migration.” Without citing Title 42, the department noted “unprecedented levels of migration” to the border and that it is “implementing a comprehensive strategy to address a potential increase in the number of border encounters.”

Previously, Sen. Rick Scott (R-Fla.) led a group of Republican senators in issuing a letter (pdf) to DHS Secretary Alejandro Mayorkas on March 24, urging the department to prepare in case Title 42 is lifted by the CDC. They said Title 42 is an “effective deterrent to illegal border crossings” and that lifting it would threaten to overwhelm the “already strained immigration system” and will exacerbate the situation at the border.

Sens. Kyrsten Sinema (D-Ariz.) and Mark Kelly (D-Ariz.) also expressed concerns, writing in a March 24 letter (pdf) to President Joe Biden that the administration should, before making changes to Title 42, coordinate a “comprehensive plan that ensures a secure, orderly, and humane process at the border.”

The two Arizona senators on Wednesday discussed with Mayorkas about the prospect of ending Title 42 and the effects on local communities in the state if there is no plan to handle the influx of illegal immigrants. Sinema called for DHS to coordinate communications between federal, state, local, and non-governmental partners to strengthen cooperation, a strategy Mayorkas agreed to.