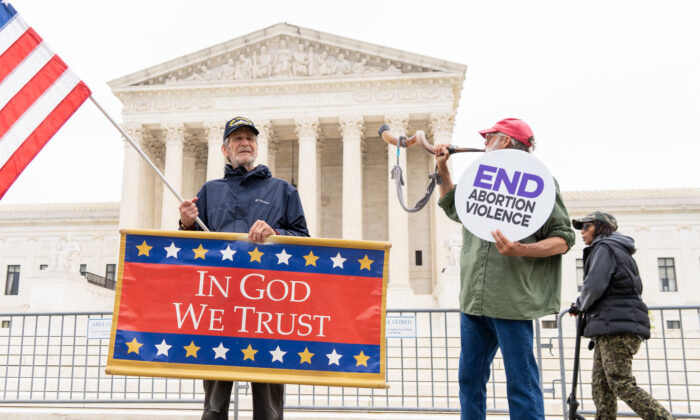 Activists protest in response to the leaked Supreme Court draft decision to overturn Roe v. Wade in front of the U.S. Supreme Court in Washington on May 3, 2022. (Louis Chen/The Epoch Times)
Viewpoints

According to a recently leaked draft of an upcoming majority opinion of the Supreme Court, Roe v. Wade is about to be overruled in its entirety. Setting aside that this is an unprecedented breach of the court’s internal security likely being done in a last-ditch effort to pressure the justices to change their minds, this alleged decision penned by Justice Samuel Alito would represent a massive step forward in stopping abortions across the country.

The draft (pdf) correctly explains that “Roe was egregiously wrong from the start. Its reasoning was exceptionally weak, and the decision has had damaging consequences.” Not the least of the referenced “damaging consequences” is the more than 63 million babies that have been murdered since the court issued the decision in 1973. If this draft is substantially similar to whatever the final version the court will release, then the individual states will become the decision-makers concerning the legality of abortion.

In many states such as Texas, trigger laws have been passed that will make abortion almost entirely illegal upon the repeal of Roe.

While any measure that stops unborn babies from being murdered is a laudable step in the right direction, the possible decision is not free from error, unfortunately. The draft goes on to say: “It is time to heed the Constitution and return the issue of abortion to the people’s elected representatives. … That is what the Constitution and the rule of law demand.” Because, according to the draft, “the Constitution makes no mention of abortion,” the court contends that abortion falls underneath the 10th Amendment, which explains how all “powers not delegated to the United States by the Constitution … are reserved to the States.”

This, however, is a misapplication of the fundamental principles undergirding the Constitution and indeed the entire tradition of American law. Just because the word “abortion” is not contained in the Constitution does not therefore mean that it’s up to the states to determine whether or not it should be allowed. For example, the Constitution nowhere mentions the fact that murder, the taking of an innocent life, is a crime. Does it follow then that one of the states would have the authority to make murder legal? Of course not. The reason being that murder violates the higher moral and natural law or, in the words of the Declaration of Independence, “the Laws of Nature and of Nature’s God.”

At its core, the American law is based upon the belief that “all men are created equal, that they are endowed by their Creator with certain unalienable Rights, that among these are Life, Liberty and the pursuit of Happiness.” Furthermore, our government only exists for the purpose of securing these rights. The Constitution expressly protects the right of a person to live by clarifying in the Fifth Amendment that no person can be “deprived of life, liberty, or property without due process of law.”

The Founding Fathers themselves were unambiguous about the fact that U.S. law protects unborn life as a natural right. For example, James Wilson, a major framer of the Constitution and one of the original justices on the Supreme Court, explained in one of his law lectures that “With consistency, beautiful and undeviating, human life, from its commencement to its close, is protected … not only from immediate destruction, but from every degree of actual violence, and, in some cases, from every degree of danger.”

Early American law was heavily influenced by the tradition of English constitutional and common law, which similarly identified that abortion was homicide and plainly illegal. Going all the way back to the mid-1200s, English jurist Henry de Bracton identified that “If there be someone, who has struck a pregnant woman, or has given her poison, whereby he has caused abortion … he commits homicide.”

Likewise, John Locke described how it’s an inherent duty for parents to protect, and not destroy, their children, saying, “Adam and Eve, and after them all parents were, by the Law of Nature, under an obligation to preserve, nourish and educate the children they had begotten.”

Out of all the English jurists, William Blackstone probably had the greatest effect on the legal philosophy of early Americans. In his 1765 book, “Commentaries on the Laws of England,” Blackstone described that “Life is the immediate gift of God, a right inherent by nature in every individual. … An infant in ventre sa mere, or in the mother’s womb, is supposed in law to be born for many purposes.”

Fundamentally, early English and American law uniformly identified that as soon as one knew that there was life in the womb, that child was protected by law from being killed.

Ultimately, while the leaked draft would be an important step forward in correcting the evils of Roe v. Wade and other pro-abortion judicial activism, it nevertheless doesn’t go far enough in respecting the Constitution. The unborn child has, like all Americans, an unalienable right to life that our government was instituted to protect from all threats. The Declaration, the Constitution, the Founders, and the legal tradition our nation was founded upon unanimously indicate that even pre-born life is sacred and must be preserved.