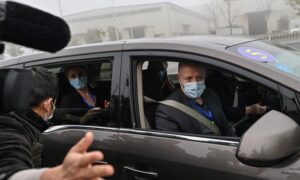 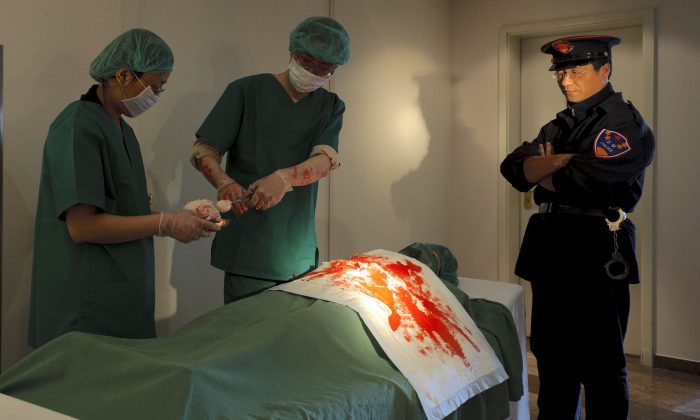 Falun Gong practitioners perform a re-enactment of organ harvesting during a rally of the International Society for Human Rights in Cottbus, Germany, on April 14, 2012. (Robert Michael/AFP/Getty Images)
Opinion

In 2006, the Washington-based Coalition to Investigate the Persecution of Falun Gong in China asked Canadian lawyer David Matas and me to investigate as volunteers the bizarre but persistent claims of organ pillaging from Falun Gong practitioners. We later released two reports and a 2009 book, “Bloody Harvest.” To our dismay, we concluded that, for 41,500 transplants done in the years 2000–2005 alone, the only plausible explanation for sourcing was Falun Gong.

Our main conclusion: “Their vital organs, including kidneys, livers, corneas, and hearts, were seized involuntarily for sale at high prices, sometimes to foreigners, who normally face long waits for voluntary donations of such organs in their home countries.”

Evidence led us to conclude that a new state crime against humanity was occurring.
Related Coverage

Here are two of numerous kinds of evidence that led us to conclude that a new state crime against humanity was occurring:

• Investigators made many calls to hospitals, detention centers, and other facilities across China claiming to be relatives of patients needing transplants and asking if organs of Falun Gong were for sale. We obtained on tape and transcribed the translated admissions that specific facilities were trafficking in their organs.
• We interviewed the ex-wife of a surgeon from Sujiatun in Shenyang City, Liaoning Province. He told her that he had removed the corneas from 2,000 Falun Gong labor camp residents between 2001 and 2003. He clarified that none of them survived because other surgeons removed vital organs prior to cremation.

Many Falun Gong prisoners of conscience who became non-consenting organ “donors” were taken from these camps.

We visited about a dozen countries to interview Falun Gong, who managed to escape both the camps and the country. They reported being sent to inhuman facilities with little food, crowded sleeping conditions, and torture, detained for up to three years on the basis of police signatures only (no hearings and no appeals). They worked in appalling conditions, making consumer products for sixteen hours daily as unpaid subcontractors, ultimately for Western companies.

The 2014 book “The Slaughter” by Ethan Gutmann places the persecution of the Falun Gong, Tibetan, Uyghur, and House Christian communities in context and focuses mostly on Falun Gong as the group most viciously and continuously targeted since 1999.

Gutmann explains how he arrived at his “best estimate” that organs of 65,000 Falun Gong and “two to four thousand” Uyghurs, Tibetans, and House Christians were “harvested” in the 2000–2008 period alone. No “donors” survived because all their vital organs were removed to be trafficked for high prices to wealthy Chinese nationals and “organ tourists.”

The three of us released a comprehensive update on the two books in June 2016, concluding that at least 60,000 transplants per year are being done across China, notwithstanding the approximate 10,000 the Beijing government claims.

I’m a … Jewish heart transplant surgeon … the son of a Holocaust survivor… I can’t keep silent in the face of a new crime against humanity.
— Dr. Jacob Lavee

We provide much evidence of an industrial-scale, state-directed organ transplantation network, controlled through national policies and funding, and implicating both the military and civilian health care systems. Some of our conclusions include the following:

• The source for most of the massive volume of organs for transplants is the killing of innocents: Uyghurs, Tibetans, House Christians, and primarily Falun Gong;
• Organ pillaging in China is a crime in which the Communist Party, state institutions, the health system, hospitals, and transplant professions are all complicit;
• The global intergovernmental community should establish an institution-based, independent investigation into organ transplant abuse in China;
• The global transplant community should connect and collaborate with its Chinese counterpart only if and when set criteria are met;
• No nation should allow its citizens to go to China for organs until China has allowed a full investigation into organ harvesting of prisoners of conscience, both past and present.

Dr. Jacob Lavee, a member of the ethics committee of the Transplantation Society until its recent congress in Hong Kong and a key figure in reforming Israel’s laws, boycotted the meeting, saying to The New York Times, “I’m a … Jewish heart transplant surgeon … the son of a Holocaust survivor… I can’t keep silent in the face of a new crime against humanity.”

Professor Maria Fiatarone Singh at the University of Sydney medical school notes: “Individuals who are not free to consent can never be used as organ donors, as this … completely dehumanizes them. … We must, as Carl Sandburg said, ‘Go with your own heart into the storm of human hearts and see if somewhere in that storm there are bleeding hearts.’ Hearts are indeed bleeding amongst the Falun Gong, the Tibetans, the Uyghurs, and the House Christians in China. As physicians, we are bound by our oath to prevent harm, and this includes acting to protect those who are being harmed by others. As humans, we can do no less.”

In the meantime, regardless of proclamations from within China or beyond that reform has occurred, until they are verified by independent investigation all transplant tourism to China should be banned, along with related types of engagement, such as consultancies, financial agreements, training, joint research grants, human trials, and publications. Outside collaborations with Chinese hospitals or surgeons who have been or are involved in unethical harvesting should not occur, even if they don’t involve transplantation, until all has been investigated, and past and current crimes admitted and punished.