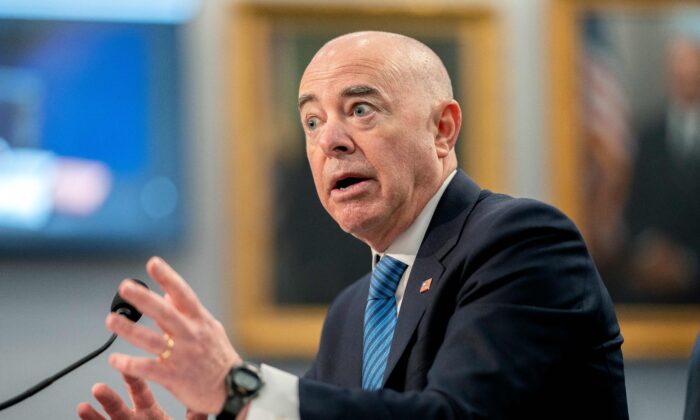 Department of Homeland Security (DHS) Secretary Alejandro Mayorkas told House members Wednesday that it has cost taxpayers roughly $72 million to halt construction on the wall along the U.S. southern border.

Mayorkas testifies this week in front of multiple Congressional subcommittees as his department requests a $2.9 billion increase in discretionary spending for the next fiscal year and as lawmakers raise concerns about the nation’s ongoing border crisis.

“The wall projects—the majority of them—rest in the jurisdiction of the Army Corps of Engineers,” said Mayorkas. “Those that we ourselves control; I believe that the cost of discontinuing them is approximately $72 million. And I will follow up with you to ensure the accuracy of my statement this morning.”

Last December, DHS announced a plan to plug “gaps” in the wall still left after President Joe Biden ordered work to stop on the barrier during his first day in office. That plan calls for the Department of Defense (DoD) to turn over unfinished wall projects to DHS in order “to address urgent life, safety, environmental, or other remediation required to protect border communities.”

“We are closing gaps and completing gates, I approved I believe approximately 68 projects in furtherance of that effort,” Mayorkas said Wednesday. “And we are well aware of our responsibility to spend the funds that have been appropriated to the wall.”

Mayorkas says an analysis on how best to spend wall funding is ongoing, and a plan on how to execute that spending is forthcoming.

During Wednesday’s House Appropriations Committee hearing, Rep. Ashley Hinson (R-Iowa) raised concerns about gaps in the wall being used by cartels for human trafficking and displayed a photo of steel meant for wall construction lying near the border unused.

“This is probably good American steel should have been used to fill the gaps in the wall that, in your memo, you mentioned are being exploited by the cartels right now,” Hinson said to Mayorkas. “So do you have anything to say to the taxpayers about this right here, these pieces of steel sitting there resting when we have this crisis at our southern border?”

Mayorkas responded by noting that DHS is obligated to spend monies allocated to the wall and assured that this would be done in a “responsible” way.

Border security concerns have been heightened since the Centers for Disease Control and Prevention (CDC) announced plans to end Title 42 effective May 23.

Title 42 is a public health order that was invoked in March 2020 under then-President Donald Trump to minimize the spread of the CCP (Chinese Communist Party) virus by ensuring that only essential travel occurred at U.S. borders. It has been used for the past two years to quickly expel illegal immigrants at the southern U.S. border.

The number of illegal aliens attempting to cross the southern border has surged in recent weeks and DHS has projected that number will likely increase when Title 42 is lifted. Officials have said the current funding level for border agencies will not be sufficient to meet operational needs during the projected surge.

Mayorkas laid out a plan Wednesday in a 20-page memorandum, outlining a series of “pillars” that officials are already putting into place to address the surge. The plan will deploy more resources such as agents to the border, and DHS is working to process illegal immigrants more quickly and expell those who aren’t allowed to stay under federal law, according to the memo.