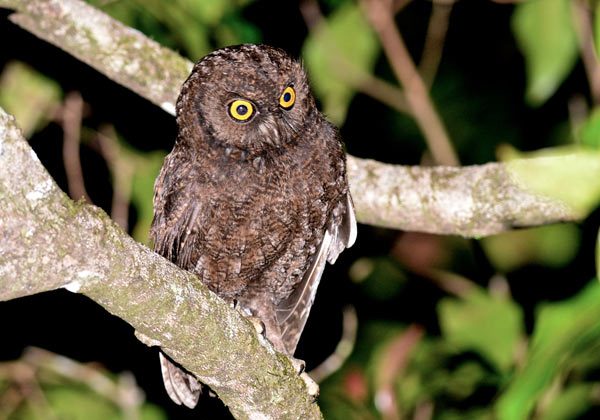 The Anjouan scops owl—an elusive owl found only on its tiny eponymous island—was once considered among the world’s most endangered owls, and even the most threatened birds. However, the first in-depth survey of the owls on the island finds that, in fact, the population is far larger than initially estimated. In a new paper in Bird Conservation International, scientists estimate that 3,500-5,500 owls survive today as opposed to an earlier estimate of just 200-400 birds.

“Our work doesn’t actually show that the owl is doing better than expected or that its status has improved, just that our knowledge of its status has improved,” said Hugh Dalton the technical director for the local conservation organization Dahari and co-author of the research. “This shows the danger of basing conservation assessments on rough and ready surveys, and perhaps a tendency to paint crisis situations for species without enough data to back up these assessments.”

Still, the owl remains incredibly elusive. Although Dalton has lived and worked on Anjouan—a small island in the Comoros—for the past seven years, he’s never actually had had the pleasure of viewing the native owl.

“I go camping at the weekends from time to time and hear the owls whistling to each other, but, sadly, I’ve never seen one,” he told monagaby.com.

Even the survey team did not depend on catching sight of the owls, but instead on listening for and recording their telltale whistles.

“The only way of surveying species like the scops owl is by counting individuals at night from their calls,” explained Dalton, who described the field work as incredibly challenging.

“[It] involved a lot of hard slogging up Anjouan’s knee-breakingly steep slopes, and camping in the forest. After dusk the team would head out with torches and set up observation points every 200 meter along a trail—it’s too steep and dangerous to stray off the paths. They stayed at each observation point for eight minutes, first listening passively then playing calls of a scops owl using an MP3. Any owls that were heard calling were recorded and an estimate made of their distance from the observation point.”

But the scientific pay-off was huge. Not only did the scientists determine that the Anjouan scops-owl’s population was more than ten times larger than previously estimated, but the team was also surprised to find owls in degraded forests and agroforestry landscapes.

“The previous estimate was…based on an assumption of the owls’ complete dependence on the little remaining natural forest, when our study shows relatively high encounter rates in areas of degraded forest and agroforestry,” Dalton explained. Finding the owls in degraded forests agroforests is very important, since Anjouan has little natural forest left.

Anjouan was once covered in lush tropical forests—as were the three islands of the Comoros—that is no longer the case.

“According to the FAO’s latest global forest resource assessment from 2010, the Comoros suffered from the highest rate of deforestation in the world between 2000 and 2010—9.3 percent per year. However, it’s difficult to validate these figures given the lack of data,” said Dalton.

To come up with a more accurate picture, the Bristol Conservation & Science Foundation released a report that relies on three sources of recent satellite data. Looking at Anjouan, which is smaller even than Barbados, the report found that only seven percent of the island is now covered by natural forests, meaning that the island has lost the vast majority of its historical forest.

The overall report broke down as follows: nearly 33 percent of Anjouan is agroforestry (13,825 hectares), 14 percent is degraded forests (5,913 hectares), and seven percent is natural forest (2,956 hectares).

“Whatever the figures are, it’s clear that there has been massive deforestation since the effective end of control on tree-cutting following decolonialisation in 1975,” said Dalton. “I’ve seen old photos of Anjouan’s landscape covered in old-growth forest, landscapes that are now dotted only with clove trees and agricultural plots.”

The drastic forest loss has also impacted rivers and agriculture across the island, creating major challengers for local communities.

“Around 30 of 45 previously permanent rivers now flow only during the rainy season, erosion of topsoil is continuous, and the subsequent loss of fertility has caused big decreases in agricultural yields,” said Dalton. “A study we commissioned by a hydro-geologist suggested that the reduction of water resources was in particular due to the loss of the moist forest in the highlands that added significantly to water retention because of the covering of mosses and lichens that traps water from mist.”

The forests of Anjouan are important, both for owls and people. Dalton noted that even though owls are present in plantations and degraded forests, they still depend on natural forests.

“It is clear that the little remaining natural forest is important to the owls. Owing to the lack of research into the ecology of the species, we can only speculate why this might be; likely factors include lower human disturbance and the presence of large native tree cavities for roosting.”

The researchers also found that even when owls were located in degraded habitats, they were often still close to natural forest.

Although, the owl’s population is larger than initially feared, it is still threatened. In fact, the conservationists are now recommending that the Anjouan scops owl be moved on the IUCN Red List from Critically Endangered to Endangered. Conservation efforts will likely be necessary to keep the owl from vanishing.

“The most important conservation action is to preserve what remains of this habitat,” Dalton said. In order to achieve this, the organization has focused on intensive community conservation.

“As ever, this is a social rather than an ecological issue. The deforestation threatens not only the endemic biodiversity including the scops owl, but also the livelihoods of 90 percent of Anjouan’s population who are dependent on agriculture,” explained Dalton. “That’s why our approach to conservation at Dahari has been to first concentrate very heavily on the development needs of the local people. Without devising ways for them to generate enough food and revenues to live comfortably, pressure on remaining forest habitat will only increase and conservation measures will be ineffective. So we have spent much of the last seven years developing an agricultural development program that has so far benefitted over 2,500 farmers, bringing back fertility to lowland fields to reduce the need to cut new fields high up in the forest.”

The local group, Dahari, is also beginning discussions with locals about setting aside some forests as protected areas.

“We’re just starting these conversations with the villagers now, concentrating first on areas of forest of direct importance to them, particularly areas that support water sources and rivers,” said Dalton. “These are the first ever attempts to put in place terrestrial conservation measures in the Comoros and the path ahead is not going to be easy—in part due to the extremely high pressure on forest, but also because of the lack of regulation mechanisms.”

Going forward, the team is also planning to conduct further study of the Anjouan scops owl, including looking at the species’ ecological needs and why it requires access to natural forest. They will also begin studying Livingstone’s fruit bat (Pteropus livingstonii), which is only found in the Comoros, on the islands of Anjouan and Moheli. The species is listed as Endangered with an estimated population of just 1,200 individuals in 2002.

“Because of the encouraging results of this study on the scops owl, our Dahari team is now focusing their initial ecology and conservation work on Livingstone’s fruit bat, as our earlier studies showed this species to be under high threat,” said Dalton.