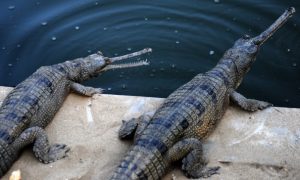 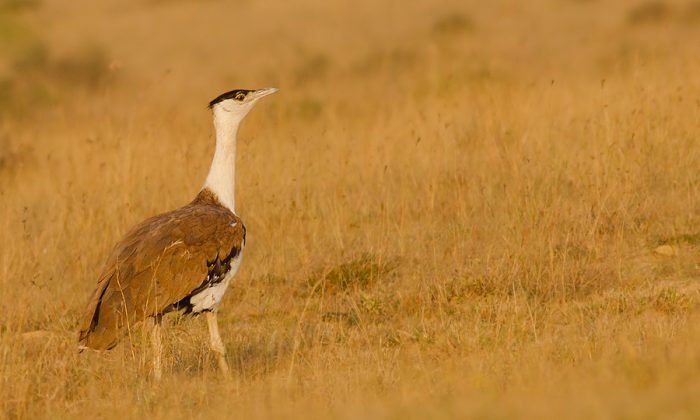 Often, conservation issues surrounding the more recognisable fauna in the world such as lions and tigers receive unprecedented attention, whereas other uncommon species go comparatively unnoticed. However a recent initiative by the Central and the State Governments of India to set up a Conservation and Breeding centre for the Great Indian Bustard in Kutch spells good news and brings hope for the survival of this species that was once found in the entire sub continent.

A tall bird with long legs, the Great Indian Bustard (Ardeotis nigriceps) is a grassland bird that has become extinct in nearly 90 percent of its range. The major reason for its decline has been loss of habitat and poaching. The rapid conversion of the arid grassland habitat of this bird to agricultural land and increasing vehicular transport has contributed greatly to lowering the bird’s population.

Concerned about the rapid decline in numbers, the state and central governments have now planned to set up a Conservation and Breeding centre for the Great Indian Bustard in Kutch, Gujarat. 75 percent of the funding for the project will be taken up the Central Government. The remaining 25 percent will be taken care of by the forest department by creating a provision for it in the state budget.

It is believed that the setting up of the centre may take 6 months, and almost the same time may be needed for the research and required field study needed for a breeding centre.

Great Indian Bustard, nests on the ground and the female lays one egg at a time. Because of the ease of reach, the eggs and the fledglings often become prey to animals such as feral dogs. The low number of eggs also hampers the chances of large increase in the population of the bird. With grasslands vanishing, breeding has become all the more infrequent among these birds.

Did you know, Great Indian Bustard is the heaviest flying bird in India?

Once a common sight on the Indian and Pakistan grasslands, this large, heavy and low flying bird is now believed to be extinct in Pakistan. In India, the surviving bird population is now seen only in select areas of Gujarat, Andhra Pradesh, Rajasthan, Karnataka and Maharashtra. More than 50 percent of the Great Indian Bustard’s population is now found in Rajasthan and the next highest number is found in the state of Gujarat with a 2007 census declaring 48 birds found here. The status of this bird on the IUCN Red List is Critically Endangered (CR).

While much has been said and plans made on papers, related to the conservation and protection of Great Indian Bustards, in the past, nothing concrete has been visible so far. The number of these birds is plummeting everyday and any action to save them can’t be delayed. India is committed in saving it’s mega predators like tiger and lion, but the bustard too is the nation’s pride. Every second lost means a step closer to losing this regal bird forever.

This article was originally written and published by Shilpi Gemawat, a contributing writer for www.indiasendangered.com. For the original article and more information, please click HERE.